BREAKING NEWS: Instead of referring the matter to a grand jury, the Travis County attorney’s office today handed down stunning findings in his investigation into whether the Austin City Council violated state Open Meetings Act laws: Guilty, on all counts. 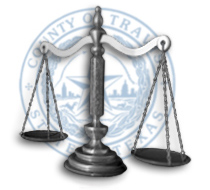 At the behest of a complaint from Brian Rodgers, county attorney David Escamilla was examining whether the council’s informal practice of meeting individually, and, in fewer cases, two-to-one, constituted official business out of the public eye. The allegation has lead to the immediate abandonment of the practice, the institution of weekly, public work sessions, and a deluge of public information requests – over 700 since January, according to the city – and the launch of two related lawsuits from The Austin Bulldog news website.

Council members have said policy wasn’t set in these individual, non-quorum meetings; rather, they facilitated a flow of information that was crucial in the oversight of an 800,000 person city by seven officials, including sharing citizen concerns and ensuring council offices weren’t needlessly duplicating efforts. As Mayor Pro Tem Mike Martinez said at one recent work session, “We have to be able to communicate in that regard to get the best policy outcome. I find it very difficult for us to get the best policy outcomes without communicating."

The county attorney’s findings, however, disagree – and moreover, prescribe drastic policy changes to be implemented immediately to prevent further violations. However, the recommendations are already causing something of a constitutional crisis at City Hall, having carried some of the issues in the original complaint through to their logical conclusion.

For instance, a council member needs one other sponsor to place an item on the agenda, but the edict forbids communication between council members of any kind. Anything less, Escamilla said “and the Council might as well post the answers on the entrance to City Hall each Thursday morning and save us all the trouble.”

Council attempted to discuss the matter in a specially called meeting this morning, but another edict prevented a more fulsome discussion. To ensure council members don’t text, message, nod or knowingly wink at each other on the dais, in an apparent violation of Open Meetings requirements, they’re required to wear blinders. 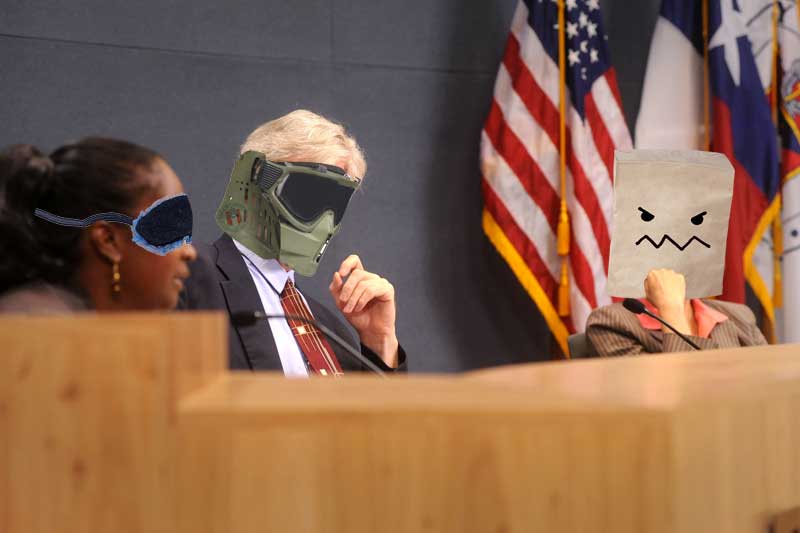 The rag tag assortment of masks, pictured above, will ultimately be addressed, said city spokesperson Rene Telles, but not terribly soon: The cost of processing hundreds of public information requests and defending the city in lawsuits has added additional strain to the city’s finances, Telles said.

The ruling is on appeal, but in an abundance of caution, city legal staff have since proposed additional modifications. To ensure council members take the dais free of troublesome preconceived notions, they’re suggesting members be remanded to what’s ominously referred to around City Hall as “the black box” for 72 hours prior to the meeting. Then, similarly to the Citizens Communications portion of council meetings where individuals can speak on a topic of their choosing, members would be allowed to peruse “approved” citizen input: potential input sources under discussion include the Bulldog, Scott Henson’s blog posts on Austin Water policy, FarmVille requests posted on Debbie Russell’s Facebook page, Tumblr posts from Ronnie Reeferseed, mustache wax tins belonging to Bill Aleshire, literature from Fluoride Free Austin, and tweets from Texans for Accountable Government’s John Bush (but only ones sent while dressed as a Nazi).

Local activists applauded Escamilla’s actions. “You may think that with Austin’s own budget talks set to begin this month, in the looming shadow of state budget cuts that will make Texans wistfully long for Robber Baron-era levels of poverty, the impending layoff of one thousand local teachers and concurrent, potential collapse of our local school district, it would be a little silly to focus exclusively on which e-mail account council members were logged into when they sent what amounts to a largely inconsequential collection of messages,” anonymous poster ReLease da EMAILZ!!1! writes in the comments section on the ChangeAustin.org website. “But you’d be wrong!”

The Daily Hustle: 4/5/11
Your City Council preview for Thursday