House Resolution 828, proving that it's the thought that counts

This just in, and we quote: "The Texas House of Representatives takes pride in its public educators, who provide an invaluable service to the people of Texas." No, really.

If you're trying to cram your brain back into your ears at this moment, this is the opening line of House Resolution 828. Authored by Rep. Vicki Truitt, R-Dallas, the resolution declares this week Texas Retired Teachers Week.

On the surface this measure of support for the Texas Retired Teachers Association is a well-deserved and well-meant nod to the hard working public school teachers of the state. But talk about writing checks with your mouth that your budget will not cash. There are a few little facts to take into account here:

One, the resolution declares March 21-25 as Texas Retired Teachers Week. Would have been nice if the Calendars Committee had got it to the floor on time, but still, it's the thought that counts.

Two, the state is obviously so enamored of retired teachers that is preparing to make lots more of them – many prematurely, as they accept early buy-outs. It makes the timing even more unfortunate, since the House Appropriations Committee just voted out its draft budget, stripping $10 billion out of the Foundation Schools program and pretty much guaranteeing 100,000 teacher lay-offs, staff cuts and position reductions.

Three, yet again the non-teaching staff (including custodians, teaching assistants, principals, nurses etc etc etc) are left out of the quality schools equation.

But four, and here may be the big one. While patting retired teachers on the head, the state is looking to cut the funding to the Teacher Retirement System.

In 2009, the legislature approved a $4.1 billion biennial budget for the public school pension fund. When the TRS filed its legislative budget request last fall, it asked for $5 billion. This is still only a third of the $15 billion the TRS expects to pay out in pensions and health care costs over the biennium, but will help with their $23 billion in unfunded liabilities. Instead of tackling that hole, the proposed House budget cuts that appropriation to $3.7 billion over the biennium.

So, for those of you keeping score, not only is that a major cut for both upcoming years from FY 2011, but it slices both the annual spend and the state's general revenue allocation below 2009 levels.

It is definitely admirable that the House decided to applaud the hard work of retired teachers. Unfortunately, they would probably prefer that missing $1.3 billion. In the long run, this could be the most expensive House Resolution ever. 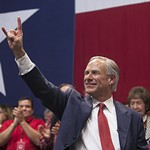