Storm in a Beer Stein

Craft beer makers and fans make their case at the Lege 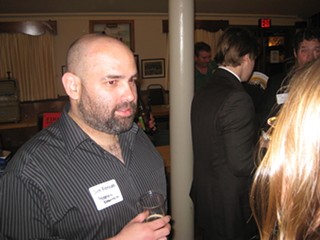 Craft brewing fans had only one tear in their beer at Tuesday’s House Licensing & Administrative Procedures Committee meeting, but it could be a big one. Texas brewers and supporters (operating as Texas Beer Freedom) turned out in force to support House Bills 602 and 660. The former's passage seemed assured, but the latter's uncertain.

HB 602 would allow microbrewers (small brewers that only produce beer) to “sell” their beer at the brewery – currently, they must reach consumers through a distributor in accordance with what is known as the three-tier system. (Actually, true sales would still be forbidden under 602, but breweries could charge admission for tours and then provide six-packs as parting gifts.)

Meanwhile, brewpubs (restaurants that brew their own) have the opposite problem – they can sell only on-site, and not to distributors. If you want their beers, you must travel to their restaurant. HB 660 would rectify that and let them get into stores and other bars.

After years of blocking on-site sales bills, the powerful Wholesale Beer Distributors of Texas lobby is finally convinced that HB 602 would not upset the three-tier system and says it will support it. However, WBDT still opposes HB 660 – although its attorney, Keith Strama, couldn’t quite explain why. His argument basically boiled down to support of the three-tier system because it forces separation between manufacturers, distributors, and retailers. Brewpubs are retailers, he said, but under HB 660, “the brewpubs … can now become a manufacturer.”

But bill author Mike Villarreal of San Antonio pointed out the obvious – they already are. HB 660 “will allow Texas brewpubs to be recognized for who they are,” he said. “They manufacture beer.” He said if distributors want to maintain the three-tier system, they must allow it to evolve.

Several speakers pointed out the absurdity of current law: Brewpubs in other states can bottle their beer and sell it in Texas stores, but Texas brewpubs cannot. This flummoxed at least one member of the committee, Rep. Chente Quintanilla, D-El Paso. Referring to an El Paso brewpub called Jaxon’s, Quintanilla said, “I didn’t realize I can’t get their beer somewhere else.” To Davis Tucker, owner of Austin’s North by Northwest Restaurant and Brewery, he said, “I’m able to buy any Mexican imported beer, and yet you’re not allowed to sell yours?”

Austin’s Debbie Cerda – a former board member at Black Star Co-op Pub & Brewery and now community outreach director for Texas Beer Freedom – said, “It saddens me to know El Paso has a brewpub beer I can’t get here in Austin.” Or as another bill supporter put it: “My understanding of the three-tier system is it’s meant to protect the consumer. All I’m being protected from right now is from getting the beer that I want.”

Rick Engel, who owns 25 restaurants and bars in Austin, pointed out another absurdity – he can’t even sell the beers from his Uncle Billy’s Brew & Que at his other businesses, such as Little Woodrow’s and Texadelphia.

Another major beer distributor lobby, the Beer Alliance of Texas, initially objected to HB 660. But after Villarreal’s committee substitute version dropped a provision that would allow brewpubs to self-distribute, the alliance swung solidly behind it. “If you were able to poll individual beer distributors across the state, you would find the vast majority of them in favor of this legislation,” said the Alliance’s Rick Donley.

Because of this distributor support, WBDT’s “unsurmountable wall has been broken,” Villarreal said in a post-committee press conference.

In addition to fairness aspect of it, the brewpubs dangled another jewel before the committee – the prospect of growing Texas businesses adding badly needed tax dollars to state coffers. Noting that similar changes to laws regarding wineries in 2003 were followed by explosive growth in that industry, Scott Metzger of San Antonio’s Freetail Brewing offered up an economic analysis he conducted estimating similar growth in craft beer.

Metzger, who is also an adjunct professor of economics at UT-San Antonio, estimated that the next eight years could produce $679 million per year of economic output, 6,829 new jobs created, $192 million of new payroll, and $57 million of annual state and local tax revenue. Metzger says he ran his numbers past noted Austin economist John Hockenyos for confirmation.

The Austin area has five brewpubs and seven microbreweries (eight if you count nearby Blanco's Real Ale Brewing), numbers rivaled only by the DFW area.

WBDT was the lone voice against HB 660. The dozens of other testifiers were unanimously in support, including several beer distributors. Both bills were left pending.