Of Sonograms and Airport Scanners

How an intrusive probe is not like a body image (apparently) 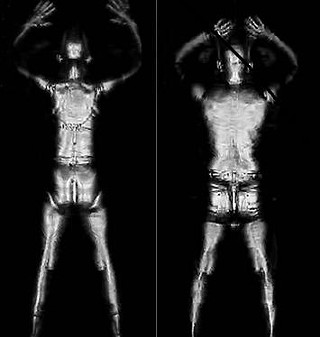 Either scans from a millimeter wave body scanner, or a slow night at a fetish club. Or both. (Image courtesy of TSA)

Joined-up thinking. Traditionally, it's been viewed as a necessity in politics, but there is a certain challenge in seeing how Republican lawmakers can back guns on campus and intrusive fetal sonograms, but are up in arms about airport scanners.

After eight years of GOP-backed security theater, apparently the new wave of millimeter wave scanners being installed at airports by the Transportation Safety Authority is too much for them. Now conservatives and libertarians are throwing themselves behind two bills by Rep. David Simpson, R-Longview. House Bill 1937, which is up before the Criminal Jurisprudence committee today, would end the new wave of TSA enhanced pat downs. It is paired with HB 1938, which would ban the use of whole body scanners.

Both measures have broad and bipartisan support (not often that you'll see Austin Democrat Rep. Eddie Rodriguez as joint author on a bill with Republican Liberty Caucus backing.) The value of body scanners as a security device is questionable, and there are broad fears that the expensive scanners are little more than a boondoggle, with former Homeland Security chief Michael Chertoff standing to profit.

But is this really the number one civil rights or public safety issue wending its way through the Texas legislature right now?

Voters may wonder whether these scans are as intrusive as, say, a fetal sonogram of the kind the GOP wants to make mandatory before an abortion. Rep. Carol Alvarado, D-Houston, showed that the probe in question is not the goo-on-the-belly kind. It is inserted into the woman, making an already physically and emotionally traumatic experience even more so. Ignoring the fact that this measure will probably collapse under even mild constitutional scrutiny, the Republicans are hell-bent on ramming that bill through as an emergency item.

The argument for using backscatter x-ray or millimeter wave scanners at airports is that they will stop guns and explosives being smuggled on to airplanes. Luckily, there are still plenty of other places you can take your gun, like the state capitol. You even get fast tracked if you have a concealed firearms permit, and the GOP is now hellbent on getting concealed handguns into college campus buildings.

Like intrusive sonograms, this is such an important issue to them that the GOP is pushing four different guns-on-campus bills. No matter that the NRA's dream of shoving gun in everyone's hands is the ultimate in security theater; And no matter that the the idea of guns in classrooms, offices and dorms is publicly opposed by Austin Police Department, the Texas Association of Community Colleges, the Texas Community College Teachers Association, the Texas Pediatric Society and Texas AFT; And definitely ignore that UT System Chancellor Francisco G. Cigarroa wrote a letter telling Gov. Rick Perry that families, students, law enforcement and mental health professionals have told him that "the presence of concealed handguns on campus would contribute to a less-safe environment."

Sticking a probe into a woman? Fine.

Bringing a gun into the legislature? Fine.

Getting a fast pass to bring a gun into the legislature? Awesome.

Full body scanners? Not on your life.