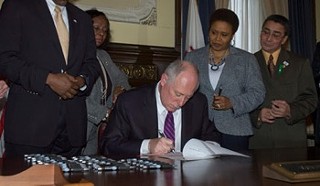 Illinois Gov. Pat Quinn today inked his name to a measure that repeals the death penalty there – replacing it with life-without-parole as the ultimate criminal sanction – and requires the transfer of state funds used for prosecuting capital cases to a fund for murder victim services.

The state's death penalty system was "seriously broken," Quinn said. "We cannot have a death penalty in our state that kills innocent people." Quinn has also commuted to life in prison the sentences of the 15 men currently on Illinois' death row.

The repeal makes Illinois the 16th state to outlaw the death penalty, meaning that the number of states that still allow the death penalty has plummeted to a 30-year low, reports the Death Penalty Information Center.

Illinois has, effectively, been debating the death penalty since 2000, when, concerned about flaws in the system, GOP then-Gov. George Ryan imposed a moratorium on executions and subsequently, before leaving office, cleared out the state's death row.

And while concerns about the fairness and accuracy of the death penalty have weighed heavily on the mind of Illinois lawmakers in recent years, the same cannot be said of the majority of Texas' elected officials. Indeed, even though the U.S. Supreme Court in 2002 outlawed the execution of mentally retarded inmates as unconstitutional cruel and unusual punishment, Texas lawmakers have yet to codify the ban. Sure, several have tried, but none has gotten the measure to, or past, Gov. Rick Perry, who vetoed such a measure in 2001, declaring it unnecessary. Rep. Garnet Coleman, D-Houston, has filed this year's version of a bill to ban executing the retarded. The measure has been referred to committee, but no hearing has yet been set. Given the official sluggishness on something this simple, it seems unlikely that any of the other death penalty-related bills – or at least those that are critical of the current system – like those seeking to abolish the death penalty, will ever see the light of day. (Two examples of such legislation can be found here and here.)

But turning a blind eye doesn't make the system's problems go away.

That's exactly the lesson that Illinois lawmakers seem to have synthesized: "If the system cannot be guaranteed 100% error free, then we cannot have the system," Quinn said. "It cannot stand. It just is not right."