The Hustle has been at this for a while, but having tuned in starting in 2003, he completely missed the near decade former City Council member Max Nofziger spent on the dais. Now, with his naming a campaign treasurer today as to challenge Randi Shade in Place 3, it's time to play catch up. Maybe my editors can help. 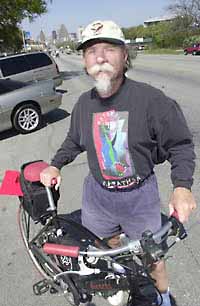 Nofziger in 2002 (Photo by John Anderson)

1. Yes, he really did sell flowers on the street.

But as he told the Chronicle in 1995, heading into his final term, his opponents were the ones making him out to be a hippie. “He was a former streetside flower salesman when he initially ran for council and won, and got a reputation both as a one of the new environmental members.” recalls my editor Michael King.

2. You could call his interests varied.

Nofziger was known for some decidedly wonky issues, according to the same 1995 profile by Mike Clark-Madison, who also explores the role Nofziger played on the so-called Green Council:

When asked about his major successes in office, Max starts ticking off things so commonplace they hardly seem of enough import to cross the desk of a councilmember, at least compared to his colleagues' drive to reinvent Austin. Citywide recycling. Getting Capital Metro to drop its fares. Ending the squabbles over funding through the Arts Commission. Getting the Sixth Street sidewalk project done during the rainiest year in Austin history. Shepherding downtown renewal along through a host of tiny little measures, like the sidewalk-cafe ordinance, instead of through grand public-funded spectacle. What about water quality, when for two years Max was the only city official who could say "non-degradation"? Nofziger sees triumph not in stoking a great populist environmental movement - though he knows, and acts like he knows, how central he was to the SOS fight - but in helping to educate the citizens. "I remember when I didn't know what an aquifer was," he says. "And now every third-grader knows. That's a very important part of my job."

My editor describes Nofziger also as “a council wild card who would go his own way as the spirit moved him. He proved that in spades when he left the council, and became part of an anti-transit coalition that campaigned in 2000 against the first round of urban rail -- largely promoting objections by SoCo businesses (Güeros) that it would disrupt business too much.” The light rail imitative, as we all know, failed.

Apparently the three term limit in the City Charter only applies to consecutive terms.

5. He may not be the only high-profile challenger Shade draws this week.

Chatter held that Planning Commissioner Kathie Tovo was mulling a Place 3 run. This message from the Austin Neighborhoods Council listserv goes a long way towards backing that up: 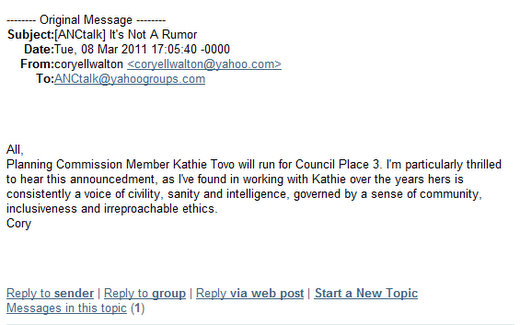