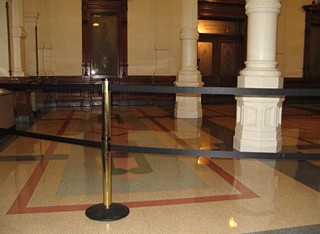 Visitors to the governor's office were greeted with an unusual site on Wednesday: The hallway on the second floor of the capitol was sealed off with the same kind of barricades reserved for cinema lines. The reason? To stop protesters assembling there.

The barriers were put up after 11 people supporting a demonstration by disability rights advocates Adapt of Texas were ticketed outside of the office on March 1.

According to the Texas Department of Public Safety, the protesters were asked to leave at 10pm when the building closed to the public. Several did, but others would not and so were ticketed for criminal trespass, a Class B misdemeanor. They were escorted from the building, and now will appear before Travis County Precinct Five Justice of the Peace Herb Evans.

However, after that incident the decision was made to limit access to the area around the governor's office. The barrier is down now, but stayed up all through Wednesday. DPS spokesperson Tela Mange said, "We wanted people who wanted to protest and express their First Amendment rights to have a place to do that, but we also wanted to keep the lanes open."

There was some rumbling around the capitol that this would have been less of an incident, and indeed more of a photo opportunity, if Gov. Rick Perry had gone out to talk with the protesters. However, he has avoided a few possibly controversial engagements this week. As one insider noted, he missed the evening gala for Tuesday's Texas Medal of Arts recipients. Thus he avoided any awkward conversations over why his proposed budget defunds both the Texas Commission on the Arts and the Texas Historical Commission, as well as functionally dismantling the Texas Moving Image Industry Incentives Program.

The timing does not help. The national media is very aware of any attempts to restrict access to state capitols. That's particularly true since Wisconsin police tackled a state representative to the ground when he tried to go to his office.

However, it seems a timely reminder that the capitol has because less open now than it was in 2005 for the 79th session. In 2007, metal detectors were briefly added at the doors to the Senate gallery. In 2009, they were added to the House gallery doors during the voter ID debate. On both occasions, they were only used during debates. Now they are on all four main entrance ways, constantly staffed by DPS as long as the building is open. The only quick way around that is to have the right kind of state-issued pass or a concealed handgun license. As has been noted, the system in place gives the press corps the wrong kind of state-issued pass, meaning they have to take all their kit through the metal detectors.

Then there was the old Capitol transit center, which disappeared in 2008. Initially, Perry claimed that the changes were to make the capitol complex "more secure for lawmakers, staff and visitors": Then they changed their mind, saying that the stop disrupted emergency service vehicles.

The one potential bright spot in this access issue may be House Bill 2131 by House Administration Committee Chair Charlie Geren, R-River Oaks. This would create an expedited pass system: Recipients would have to pass the same background check as someone applying for a concealed handgun license, but without having to learn to use a gun.