Where exactly is this election fraud? 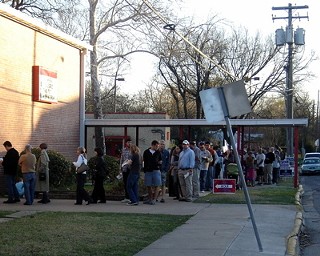 Republicans claim that many of these folks are committing fraud. (photo by Lee Nichols)

Hearings on the Voter ID bill are about to begin in the Senate. Stay tuned to LegeLand, both here on Twitter, for updates throughout the day. Expect Republican "experts" to testify about how an "epidemic" of voter fraud is threatening our democracy. Yesterday, in a back hall conversation, one senator scoffed at these claims:

"Republicans claim all these undocumented immigrants are coming over the border and voting," said San Antonio Democrat Leticia Van de Putte. "I just wish we could get actual citizens who speak Spanish to show up and vote."

Democratic consultant Harold Cook also threw in his two cents: "If Democrats are bringing in all these fraudulent voters, why do we keep losing?"

This session's bill is harsher than last's. The previous bill allowed voters without photo ID at the polls to alternatively bring two forms of non-photo ID, such as a utility bill. This one requires photo ID.

Nonetheless, Gov. Perry – in a session where the budget deficit is threatening to gut schools and other essential government services throughout the state – has declared that Voter ID is "emergency" legislation and must be dealt with immediately, hence today's hearing.

Because all bills must go through committees before coming to the floor for a vote, the Senate is meeting as a "committee of the whole" to speed up the process. Senators will hear both invited witnesses and public testimony in what is expected to be a long day, possibly culminating in a vote tonight. If you want to testify, head down to the Senate and sign up. The public will testify after the invited witnesses.