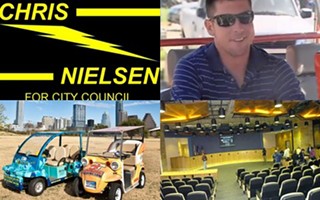 Earlier this week, we saw another filer in the spring races: Chris Nielsen, gunning for Randi Shade's seat.

While relatively unknown politically, there's a wealth of information about Nielsen and his run-ins with the city over licensing his fleet of golf cart cabs operating Downtown – seemingly the impetus behind his Place 3 run.

For the past few years, Nielsen has overseen several electric-powered golf carts, picking up short fares Downtown in a tips-only model. However, his company Capital Cruisers has had a plentiful streak of clashes with the city over how his business can operate. This KVUE clip from August 2009 delves into the deets (NOTE: No preview displays for two clips below, but they should play fine once you start them):

(The Hustle's favorite quip: “They said that there's a thousand golf cart accidents a month. It's true, but they're happening on golf courses with teenagers and men over 80 and these are clearly not the drivers that I'm using.)

This next clip, dated just a day later, informs us the police impounded two of Nielsen's carts:

At issue, apparently, was Nielsen and the city's clashing interpretation of transportation code, a regulatory gray zone also affecting pedicab operators. However, when City Council took first crack at revising their taxi and transportation codes in October of last year, it appeared a compromise was being hammered out between Nielsen and the city. Take it away, Shelton!

Here, we can see Nielsen espousing some talk at home on the campaign trail: "I believe that the lesson to be learned from this is that the government does need to be held accountable to its citizens, and they need to remember that they work for us and whenever we have a good idea, a good concept that is safe, efficient and benefits the people, they need to be responsive."

Moving past these contretemps, Nielsen now lists himself on Facebook as “Co-Founder of Electric Cab of Austin, Austin's first and only solar powered electric transportation service.” However, his Facebook page also features a Jan. 13 event at the municipal courthouse, billed as “Showdown! Sustainable transportation VS Corrupt city staff!,” suggesting the headaches of the last two years may not be entirely behind him.