Ever since election night and her 16 vote win over Republican Dan Neil, the mantra of Rep. Donna Howard, D-Austin has been, "We're just going to keep doing what needs doing." Turns out, that was a good attitude. The recount is in, and Howard retained her seat by 12 votes.

This will come as a big relief to House Democrats, who still hold 51 seats in the lower chamber. True, it's not much, but it denies the Texas GOP a supermajority.

Of course, the fact he bit into Howards' lead by four votes is probably little comfort to Neil. Out of the three GOP House candidates in Travis County deemed to be serious contenders (along with Patrick McGuinness and Paul Workman), Neil's campaign seemed to grind to a halt. Even GOPAC-TX, the PAC he helped found, barely sank a dollar into his campaign.

In fact, his call for a recount was probably the biggest push he made after his misguided and untrue claim that Howard had him kicked off the air at his job at ESPN Austin.

So far, no sign that Neil has formally conceded, and he seems to be keeping an avenue of challenge open. It seems that some absentee voters were sent the wrong kind of ballot, one that included races in which they are not eligible to vote. Not an issue, according to Neil, who said, "The fact is that overseas voters who voted straight Republican clearly intended to vote for Republican candidates up and down their ballot, including the race for state representative in District 48." Neil argued that "many [the ballots] were likely cast by military personnel," which ties in to the tired old "Demmycrats hate the troops" rhetoric that too many candidates love.

Leaping quickly on the bandwagon was a new group called Austin Vote Action, alleging that the operations of the Travis County Elections Division "facilitate fraud and errors and make it almost impossible to verify the validity of any vote." The head honcho for this group? Republican Liberty Caucus chair Dave Nalle, who mounted his own utterly unsuccessful challenge to Howard's fellow Travis County Democrat Dawnna Dukes in 2002.

If Neil does want to push this further, it'll go before the legislature. However, Howard's people are pretty confident they have electoral law on their side. Her attorney Buck Wood said in a statement, "Under the law, certain voters, primarily civilians living overseas indefinitely, are allowed to vote only in federal races. Those persons are simply not allowed to vote in the HD 48 race. Travis County election officials correctly counted their ballots. Even if those voters wanted to vote for Ms. Howard or Mr. Neil, their votes are not allowed in this race." 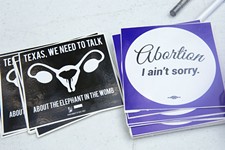