News from the frontline of the War on Drugs 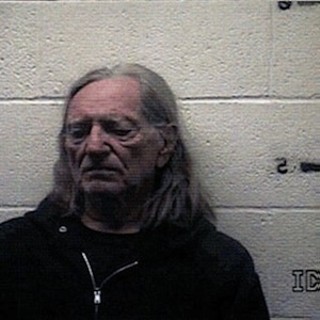 Willie in the pokey

Stop the presses: Willie Nelson was busted last week for pot possession as he returned to Texas from California.

Below, find out the details on the bust – and whether it was proper – along with other drug war news.

Seems like a gimme arrest for sure – gee, who'd guess that Willie Nelson would have some six ounces of pot on board his tour bus? Everyone, of course, including Hudspeth Co. Sheriff Arvin West, who took Nelson into custody last week.

It seems that Nelson's bus was checked at a U.S. Customs and Border Patrol crossing this side of El Paso, at Sierra Blanca. When agents boarded the bus they found the dope. The question, of course, is why did they search the bus in the first place – because Nelson had done something wrong? At this point that isn't entirely clear.

But famed Texas defense attorney Dick DeGuerin – who just lost a bid to have former U.S. Rep. Tom DeLay acquitted of money laundering – told Rolling Stone that he believes Nelson should challenge the propriety of the stop: The Sierra Blanca stop is meant to check for illegal immigrants, not just as a random check of everyone: "It's supposed to be a checkpoint only for aliens, and [agents] overstep their authority all the time," he told the magazine. "I've had several cases from that checkpoint and they just use the opportunity to check out anybody they want to. If you have long hair, if you're driving a van or it looks like you're from California or you look like a hippie, they do profiling." And that, as we all know, isn't exactly legal.

Indeed, as Scott Henson put it in his Grits for Breakfast blog, one has to wonder what the point is of busting Nelson – and about how many other things might've slipped under the CBP radar while the agents were preoccupied with the high-profile, but decidedly minor, search and arrest.

While the feds were swift to stop Nelson from driving across Texas with a fairly minor amount of dope, they haven't been as successful in stopping billions in U.S. currency tied to the drug trade from moving back and forth, according to a new report from the Government Accountability Office.

The GAO reports that somewhere upwards of $39 billion in currency moves across the southwest border each year. The CBP is responsible for inspecting travelers for so-called "bulk cash" transports; from March 2009 through June 10, 2010, however, they seized only roughly $41 million leaving the U.S. across land borders. "CBP is unable to inspect every traveler leaving the country at land ports of entry and smugglers of illicit goods have opportunities to circumvent the inspection process," the GAO writes. The government needs to figure out a better way to catch this money using its "scare" resources, the agency says.

Reefer Madness has tried to leave this one alone, but frenzied lawmakers and sensationalist news reports have made it hard. So, here we go: Apparently the kids have, yet again, found a way to get high that is – at least for now – still legal.

The drug in question is synthetic pot, sold as K2 or Spice, in head shops or over the Internet. It is an herbal blend containing one or more synthetic compounds that mimic tetrahydrocannabinol, or THC, the main psychoactive compound in marijuana. (As it happens, one of the compounds used in the "fake" dope is actually a cannabinoid developed by Pfizer more than two decades ago.) Because of the way the compounds work, the synthetic dope actually binds with receptors that heighten psychotropic effects, but this doesn't necessarily mean its any more dangerous than regular pot.

Of course, that hasn't stopped the hysteria. Synthesized pot is now illegal in 12 states, and although Texas isn't one of them, it has been banned in several cities here. Still, that doesn't mean Texas legislators won't be on the bandwagon to ban the evil non-weed. Chief among those promising to do away with legal access to the substance is Plano Republican Sen. Florence Shapiro, who appeared on Fox & Friends this summer to talk about banning the product that the kids are smoking from "bongs" (watch the clip – it's worth it, if only to hear her talk about said paraphernalia, and about kids performing exorcisms of friends high on K2. It's all just "devastating," she laments).

Shapiro hasn't filed it yet, but says she expects to author legislation outlawing K2 and all of the compounds used to make it. I guess we'll see how that goes. Meanwhile, however, the Drug Enforcement Administration has decided that it is of the utmost importance to ban the fake dope NOW. Forget that it's been around for years, it seems like the time has finally come to act quickly: On Nov. 24, the DEA announced that it would use its emergency scheduling authority to place five of the cannabinoid compounds on Schedule I, the most restrictive category of controlled substances (which includes marijuana), those drugs it deems without any therapeutic uses at all (to put it into perspective, neither LSD nor MDMA are on Sked I). The emergency authority means the substances are banned for a year while the agency sorts out "whether these chemicals and products should be permanently controlled," reads an agency press release.

That move, made on Nov. 24, means there is now less than a month left to buy the synthetic dope before it becomes federally controlled – no time like the present to stock up for all your holiday gift giving needs!

SPEAKING OF THE DEA…

Not surprisingly, the longtime acting head of the DEA, Michele Leonhart, made it through her confirmation hearing before the Senate's Judiciary Committee last month, meaning she's that much closer to being named the agency's new full-time top narc.

And when that happens (which it inevitably will), it appears that we can expect much more of the same from the DEA – including strict enforcement of pot laws, even in states with medical marijuana and even though the Obama Administration has said the federal narcos should back off from busting medi-pot users who are in compliance with state laws. That apparently doesn't impress Leonhart, who told the committee members last month that she knows well the dangers of pot: "I have seen what marijuana use has done to young people, I have seen the abuse, I have seen what it's done to families. It's bad," Leonhart said, according to a story in The Daily Caller. "If confirmed as administrator, we would continue to enforce the federal drug laws."

This went over big with Alabama Sen. Jeff Sessions, who told Leonhart that he is a "big fan of the DEA" (what a suck-up). Moreover, Sessions went on to agree with Leonhart about the scourge of pot and cited a few untruths that apparently no one on the committee bothered to correct – including that any "country that's tried" legalization has found that has "failed. It does not work," he said. Reefer readers, of course, would know that Sessions isn't exactly correct – take, for example, the compelling example set by Portugal, which decriminalized most drugs in 2001. (True, not exactly across-the-board legalization, but nonetheless a successful look at what happens when you start looking at drug use as a public health question and not a criminal one.) But we also know that the truth hasn't yet worked to stop the onward momentum of the losing war on drugs.

AND ABOUT THAT DRUG WAR…

Yes, there is little doubt that politicians and federal bureaucrats just love the drug war. But does it work? Nah. No way, and never has. And more proof of that just popped onto headlines yesterday, courtesy of the Associated Press.

According to their latest investigation, a sweeping bust of the Sinaloa drug cartel, which began with an arrest in El Centro, California, in 2005, has had little – if any – impact on Sinaloa operations. Indeed, according to the AP, government crackdowns on Mexican drug cartel operations rarely, if ever, have any meaningful effect.

BAN THE PLANT BUT NOT THE PRODUCT?

The first U.S. house made primarily from industrial hemp has been finished in Asheville, North Carolina.

As hemp construction picks up in the U.S. maybe lawmakers will finally be convinced to reauthorize American hemp production. That means, essentially, telling the DEA to buzz off: Although hemp is non-narcotic, the DEA has flexed its muscle to maintain the ban on the crop.

Under current law, hemp can be imported and sold in the U.S., but cannot be grown here – while the hemp-product industries continue to grow annually by double digits, the hemp used to make those products must all be imported, often from China or Canada.