Writing on the Wall in SBOE Races 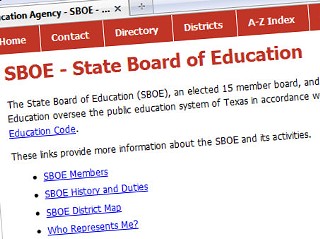 It's pretty clear that the chances of Democratic Travis County getting Democratic representation on the State Board of Education are nil tonight. Incumbent Ken Mercer, part of the extreme right-wing faction of the board, and Republican Marsha Farney, will win seats 5 and 10, respectively.

Here at the Democratic results-watching party at the Driskill – if you can call this morose, poorly attended gathering a party – Democratic candidates Rebecca Bell-Metereau (Dist. 5) and Judy Jennings (Dist. 10) soberly reflected that, despite the shenanigans of the board that have made Texas a national laughingstock, the results were probably a given.

Proponents of returning some sanity to the board (and getting politics out of it) will no doubt be crushed that the evolution-denying Mercer will still be making educational policy in Texas, representing a district that includes southern Travis, stretches down to San Antonio, and covers much of the Hill Country.

"This was fairly predictable for Mercer to do well given how he did against Tim Tuggey [a moderate Republican primary challenger]," Bell-Metereau said. "We just have to figure out what are we going to do for 2012, because all the seats will be up [after redistricting]. We can’t let education in Texas flounder. We have an emergency situation in Texas, and I think it’s something we can tackle even outside the Board of Education. I’m ready to keep fighting the good fight to see that we get a 21st century education for our kids."

Bell-Metereau said she'd consider running again. I pointed out that tonight's GOP sweep in the Legislature won't do Democrats any favors when redistricting comes up in the 2011 session. "I don’t think they could make it any worse, though," she replied. "I can see now where I need to make friends and establish relationships. Twelve counties is a lot to make friends with in the space of a little over a year.

"I think if enough people know what’s going on … we just weren’t able to spread the word in the amount of time we had. I can’t tell you how many people I spoke to who were Republicans who said 'We need a teacher like you on the board.'"

"Like somebody said on a blog," she laughed, "if Rebecca Bell-Metereau is a socialist, then George Washington was a Marxist."

Dist. 10 offers more hope for the reasonable segment of society, though. Marsha Farney campaigned as a "common-sense conservative," although she didn't outright rebuke her one-term predecessor, the controversial Cynthia Dunbar. Farney also showed she can shoot ideological cannon fire, though, with commercials blasting Jennings as a "Wisconsin liberal" (that's where Jennings is originally from), and blasting the other party as "America-bashing Democrats."

Asked if Farney could be better than Dunbar, Jennings said, "I always have hope."

"People told us from the beginning that our races were heavily dependent on what happened at the national level," Jennings said of tonight's Democratic Hindenburg. "We worked as if that was not true, but it appears that it may be true."