But was it a victory lap or 11th-hour jitters?

Leffingwell, speaking first, lead with some frightening statistics: the Austin/Round Rock region is the fourth fastest growing region in the nation, and larger than many other populous cities, with a population on pace to crack 1.5 million by 2040. Following, in descending seniority was Kirk Watson (mayor from 1997-2001). (Will Wynn (2003-2009), scheduled to appear, was apparently out of town.) Watson approached the package from a financial standpoint, calling the comparatively low current price of construction “the silver lining that’s in the dark cloud of this great recession,” and saying the proposal’s planning efforts could leverage state and federal dollars by making many projects shovel-ready. Gus Garcia (2001-2003) hit on the process, calling it “perhaps the most transparent bond process the city’s ever had.”

Other exes spoke briefly, and were somewhat more measured. Bruce Todd (1991-1997) applauded the multi-modal funding. Lee Cooke (1988-1991) said “some of us would have liked to have seen it broken out” into separate packages, but cited his administration’s vote on the convention center – occurring in another recession, in the late 1980s – as an example of the opportunities economic downturns can contain. Finishing up were Frank Cooksey (1985-1988), and Ron Mullen (1983-1985), noting of the opposition “it’s a lot easier to be critical than correct.”

About that opposition: One mayor markedly absent was Carole Keeton Strayhorn, who’s Austinites for Action has served as a tentpole for transpo bond opponents. One pro-bond City Hall insider the Hustle spoke with predicted the race would be close, noting that while Prop 1 won’t raise taxes, the ballot language still calls for “The issuance of $90,000,000 in tax-supported general obligation bonds.” And also, with state races galvanizing Austin’s liberal constituency, straight ticket Democratic voters may see the prop as an afterthought.

Guess we won’t know until Tuesday. Get Austin Moving will host election night festivities at the Shoal Creek Saloon once the polls close. Whether it’s a celebration, or something decidedly less upbeat, remains to be seen. 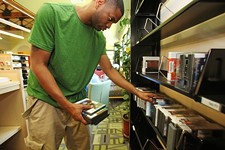