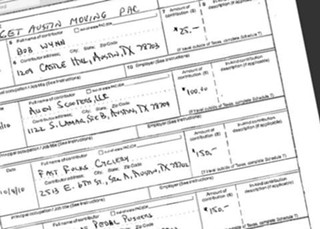 The election's coming up, and that means eight-day-out campaign finance reports are in from groups sounding off on the city's $90 million transportation bond election.

Follow the Hustle below the fold for a spending breakdown from three political action committees who want your vote on the transpo bond.

Bond opponents are having fun highlighting a $1,000 contribution from former Halliburton subsidiary KBR, along with contributions from out-of-town engineering and construction consultants like Dallas' CP&Y and HNTB in Kansas City, Kansas, although contributing local builders outnumber the carpetbaggers. The majority of their expenditures go to canvassing, with local activist Debbie Russell on the payroll.

Engineers Affirming Sustainable Transportation PAC report $2,650 in contributions, $2,158 in expenditures, and $3,492 cash on hand, bolstered by a self-loan off $3,000, apparently from Jim Skaggs, who also contributed $2,000. All their money has gone to signs. (I see one particularly big-ass one every time I leave my house to get onto MoPac. Yes, I have a license now, thank you very much.)

Sensible Transportation Solutions for Austin PAC reports $42,290 in contributions, practically all from former Texas Monthly publisher Mike Levy, although Skaggs also contributed $10,000. Newspaper ads, printing and a mailing list comprise all of Levy's in-kind contributions. Check it below for a further breakdown.

On the city calendar: The Building and Standards Commission meets in the Boards and Commissions room at City Hall, 301 W. Second, 6:30pm.