Doggett Not Taking Reelection for Granted 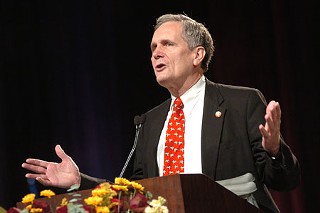 As we noted recently on this blog, history and raw numbers would suggest that Congressman Lloyd Doggett is a shoo-in to win reelection in District 25. But nervous talk among Democrats at Tuesday’s Central Texas Democratic Forum had us wondering whether his campaign had seen any worrying poll numbers.

"The only polls that count are those where voting is already underway," Doggett told me later, but he and his fellow Democrats made it clear that they are not taking the challenge from Republican Tea Party favorite Donna Campbell lightly.

And in an impassioned plea for Travis County Dems to go vote early, Austin state Sen. Kirk Watson noted how heavily the liberal Doggett relies on Travis to counter the more conservative areas of the district, which includes all or part of seven other counties. Doggett beat previous challengers in CD 25’s current configuration with 67% (2006) and 66% (2008) of the vote, and each time, Travis provided about two-thirds of Doggett’s votes.

“If we wake up on Nov. 3 and Congressman Doggett hasn’t had the margin he needs in Travis County, we’re all going to be sick, because we know what he means to us in Washington, D.C.,” Watson said.

“I think there is a tendency, because we have been so effective and so successful here in Travis County, to assume that our victory is inevitable,” Doggett said. “But I have to tell you, just as Republicans in Williamson County always thought it was inevitable they would win until [Democratic Dist. 52 state Rep.] Diana Maldonado upset things last time; it’s not inevitable that we score a victory.

“And when you look at the early voting that’s been going on in our county, frankly, it’s fairly alarming,” Doggett continued.

For examples, he pointed to this past Sunday at the Carver Library, when many nearby churches were going to push their congregations to go vote – but only 30 people cast votes there. And the day before that, at a mobile voting site at the Southwest Key Program – after a parade and rally encouraging people to vote – only 17 ballots were cast. Those East Austin neighborhoods are crucial pillars of Doggett's support.

Meanwhile, across the Hays County line, Doggett said Dripping Springs had 1,000 people show up one day, and the heavily Republican Belterra subdivision turned out 850 the next.

Of course, those results aren't perfect predictors, as early voters are not required to vote in their precinct, but it seems logical that most would do so at the polling location closest to their homes.

“It’s not that within our county that East Austin is doing dramatically worse than it has done in the past in early voting, it’s just that many other areas … are doing so much better than they did before.”

Doggett pointed out that Campbell has said she’s against federal funding for education (a point he’s been hammering recently in a campaign commercial), against minimum wage laws, and against abortion even in cases of rape and incest.

“That kind of person in Austin, you’d say would run last for [Austin Community College] board,” Doggett said. “What we have happening this year is an under-the-radar campaign right here in Travis County, and it is supplemented to a great degree when you get out to these other counties. … Don’t take any of this for granted.”

(NOTE: This story has been edited slightly since its original posting.)