Paperless Voting to Continue, for a While

Commissioners accept plan to add paper, but not until after 2012 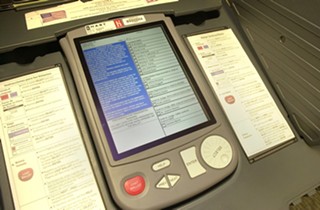 If you distrust Travis County’s electronic, paperless voting machines, you’re out of luck until at least 2013.

“The Group suggests that this migration should occur as soon as an alternative that meets Travis County’s requirements is available,” reads the report (pdf here). “At this time, none of the systems currently on the market meet these requirements, but it is expected that products meeting these standards will be on the market in the near future.”

"Although optical/digital-scan ballots systems are on the market now, they do not meet the Group’s standards for security, software design, and cost effectiveness," the report noted.

The report’s authors expressed confidence in the security procedures put in place by County Clerk Dana DeBeauvoir, who spearheaded the implementation of the Hart InterCivic eSlate system in 2004, but nonetheless wrote that the group “is concerned about the security risks associated with an all-electronic voting system and its effect on public trust in the election process” and “finds that Travis County should migrate as soon as is practical to a voting system that combines a paper ballot record with an electronic count.”

DeBeauvoir told the commissioners that the group's research indicates such a system will not be available until after the 2012 presidential election.

The report’s recommendations were approved by a 3-0 vote, with commissioners Margaret Gomez (who is ill) and Ron Davis absent from the dias.

In a press release before the meeting (and during previous Commissioners Court meetings), an anti-electronic voting activist group called the Hand Count Coalition blasted the composition of the group, writing “42 of the 45 members of the group were handpicked by [DeBeauvoir] and were her longtime friends or her colleagues in county government. Additionally, most of her selected members were participants representing only themselves as individuals, not constituent groups of voters.”

Because DeBeauvoir spearheaded the implementation of the Hart InterCivic eSlate machines, the HCC said her membership on the commission “amounted to asking a bank to audit itself.”

DeBeauvoir disputed those characterizations, telling the court, “I don’t think that the Republicans, the Democrats, the other members on the group would agree that they don’t represent the community.”

A minority report (pdf here) from the Study Group, supported by VoteRescue (a group related to the HCC), the Gray Panthers of Austin, the Travis County Green Party, and District 12 of the League of United Latin American Citizens, made a list of alternate recommendations, mainly that the county switch to hand counted paper ballots, and do it now.

“We agree that such a move must be made, but instead recommend that the move be made immediately, as opposed to ‘as soon as possible,’” reads the minority report. “We conclude that a hand-counted paper ballot voting system, which can be implemented immediately, would entirely eliminate the (mistaken) need to wait for election equipment vendors to develop the new generation of voting system.”

“It appears to us that the primary goal of our election officials is how do they make the process as convenient and streamlined for them as possible,” VoteRescue’s Karen Renick told the commissioners. “It is always the election officials that our legislators have to make happy. It is never the voters, because god forbid, we don’t know what we’re talking about, we’re just the voters – the unwashed masses that have to be herded through the voting chutes to get the job done and get the totals spit out in record time.”

“The hand-counted part of it was rejected so obviously and so grandly by the group itself,” countered DeBeauvoir, noting that the 25 members voted for the the plan in the final vote, with five others supporting some sort of hybrid plan. “They were simply not willing to take on the hand-counted part. They did not think it was responsible. I think just about anybody you talk to will say, in a community as large and urban as ours, we need help making sure that we’ve done it accurately and quickly in order to get the word out who has won the race. Part of having faith and trust in your election system is being able to know who won the election.”