With a recent presentation on permanent supportive housing – a strategy that Dallas Observer columnist Jim Schutze jokingly described as “disguising the homeless as not homeless by giving them homes” – homelessness is again on the city's radar.

So for the first (well, maybe not the first) installment of the Hustle's book club, let's learn about the tome he just published.

Looking Up At The Bottom Line: The Struggle For The Living Wage! sounds like part personal history, part policy prescription from the long-time firebrand. Take it away, Richard:

My book is an intense personal, political, and educational guide through the last 30 years of homelessness in America. I returned from Viet Nam confused and homeless. Wandering across America, I landed in Philadelphia. I was lucky. I met Max Weiner, a pioneer in consumer activism. After several years of pain, he changed my life.

My early years as an advocate for consumer’s rights and fighting foreclosures got me off the streets and led me to a life-long career with Legal Aid. I began refurbishing abandoned houses only to have them threatened by a declining economy and drug lords. So, I fought for and created Mobile Mini-Police Stations, which saved my neighborhood and are still in use today in several cities. Life taught me that the solutions to hard problems lie in the problems themselves.

In 1989, I founded the non-profit House the Homeless (HtH). I challenged a No Camping Ordinance for five years that criminalized the homeless for their economic circumstances by fining them $500 for sleeping outdoors. HtH posed the question: Jail the homeless or job train them?

When Bergstrom Air Base was repurposed to become an airport, I tried to activate the McKinney Act, which allows federal property that is no longer in use or underutilized to be used for people experiencing homelessness. Again, in spite of a law to support my efforts, the hospital that worked for the military was deemed unsuitable for the homeless.

Do you know the primary cause of homelessness is the minimum wage? According to the U.S. Conference of Mayors, a person working 40 hours a week at a minimum wage of $7.25 doesn’t have enough money to afford a one-bedroom apartment anywhere in the United States.

Again, “The problem points to the solution.” Looking Up At The Bottom Line offers the solution: The Universal Living Wage (ULW). The ULW adjusts the federal minimum wage, and indexes it to the local cost of housing throughout the U.S. By doing so, any person who works 40 hours a week is able to afford basic rental housing (including utilities) along with food and clothing.

You can find Troxell's book on Amazon. As he writes, "All proceeds go to support efforts to end economic homelessness. We encourage everyone to purchase a copy for local libraries or shelters -- vital resources for the economic homeless."

On the city calendar: The Austin Mayor's Committee for People with Disabilities meets in the Boards and Commissions room at City Hall, 301 W. Second, 12pm.

The Board of Adjustment/Sign Review Board meets in Council Chambers at City Hall, 5:30pm.

The Waterfront Planning Advisory Board moves into the B&C room at 6pm. 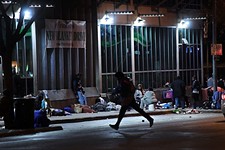 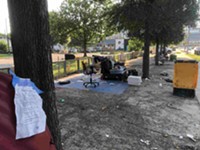