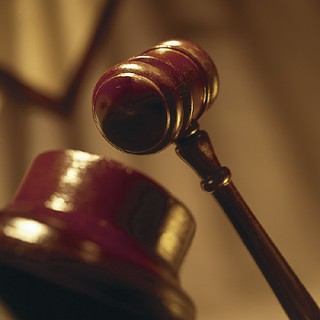 If this week's sleepy City Council agenda lacks excitement, leave it to Judge Sam Sparks to light a fire. Below the fold, check the Hustle's rundown of the August 5 agenda, and Sparks' ornery order rescheduling the Sanders trial and slamming council.

Item 5: Ordering the November bond election, and adopting ballot language for the vote. No specific mention of the Lady Bird Boardwalk project.

Items 6, 13, 14, 20, 21, and 22: A $3.5 million contract, plus the cost of creating of additional full-time positions, server infrastructure and storage for Phase 1 of installing digital video cameras in police patrol cars.

Item 19: $6 million for a remote streetlight monitoring system “that will improve the performance level of the City’s streetlights by communicating outages directly to AE via the existing fiber optic network.”

Item 23: A $3.8 million, 24-month contract with Sherry Matthews Advocacy Marketing, plus 36 months of extension options, for an amount up to $11.1 million, for marketing and media services related to child safety, wellness and tobacco prevention. Funded by grants and backup states, “Additional funding sources would be provided by additional grants.”

Item 28: From Chris Riley, requiring Downtown alley vacations first be reviewed by the Design Commission and the Downtown Commission.

Item 29: Resolution from Riley and Laura Morrison directing City Manager Marc Ott “to establish an expedited public input process to develop regulations and a development bonus system for implementation of the East Riverside Corridor Master Plan; and to expedite the board and commission process for the proposed regulations and bonus system.” The latter means limiting hearing and recommendations to the Planning Commission.

Item 30: Morrison, Riley, and Bill Spelman propose “to designate the Board of Adjustment as the body to (1) hear and decide a request for a variance from a requirement of the NCCD [Neighborhood Conservation Combining District] and (2) consider an appeal of a decision of the building official regarding a site development regulation prescribed by the NCCD.”

Items 40-45: The entirety of a decidedly lackluster zoning agenda.

Item 52: An appeal by Albert Stowell regarding the decision to renew an Outdoor Music Venue permit for the Allan House, 1104 San Antonio Street.

Item 53: Appeal from the Zilker Neighborhood Association regarding the decision to approve an Outdoor Music Venue permit for Opa’s, 2050 South Lamar Blvd.

… And because it wouldn't be The Daily Hustle without The Daily Sanders update, lets turn to Judge Sam Sparks' scathing rebuke of the City Council in his order setting the Sanders civil trial anew for November 2011. Blowing massive holes in Mayor Lee Leffingwell's 'savings-to-taxpayers' argument against settling, Sparks writes “... this case has already been a substantial expense to the American taxpayer because of not only the management of this controversial case by the Court's staff, but also the preparation for hundreds of potential jurors, a special setting of the case to the exclusion of all other civil and criminal cases [during the period Sparks' court initially set the trial], … multiple pre-trial hearings, and the review of hundreds of pages of pleadings, motions and proposed instructions and legal memoranda.”

Moreover, Sparks sets two conditions on the council for future settlement options: ordering that “Any future settlement negotiations between the parties must include all members of the City Council,” meaning any future talks should occur in public, as not to violate the Open Meetings Act; and stating “since the federal judges in the Austin Division of the Western District of Texas cannot rely on the City of Austin to support the recommendations of its lawyers, the judges will no longer accept settlement announcements and cancel trial hearings in cases involving the City of Austin within twenty-five days prior to any trial date.”

Sparks also writes “It is not clear if the parties will ever be able to obtain a constitutionally fair trial in Austin because of the pretrial publicity and public statements made by counsel and public officials to the media.”

On the city calendar: The MBE/WBE and Small Business Enterprise Procurement Program Advisory Committee meets in the Board and Commission room at City Hall, 310 W. Second, 5:30pm.

The Zoning and Platting Commission meets in Council Chambers, 6pm.