If the Horseshoe Fits 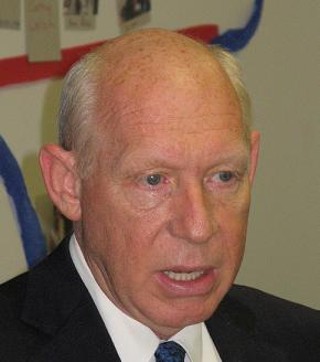 Conventional wisdom about Texas politics in recent years is that GOP leaders are the masters of mudslinging while the Democrats don't have the stomach for a real fight. Seems like the Bill White campaign is prepared to test the mettle of Gov. Rick Perry with a multi-pronged attack, starting with a skirmish in Horseshoe Bay.

On Friday, White held a press conference in Austin, building on some reporting by the Dallas Morning News. In his normal "all steak, no sizzle" low-key approach, White raised some uncomfortable questions about Perry's land holdings. However, that simply builds on a broader Democratic wave that stresses not simply Perry's flaws as a governor, but raises questions about potential malfeasance.

Is negative campaigning really a strong area for White, a noted policy wonk. Chris Cillizza at The Fix recently updated the Texas governor's race from "Lean Republican" to "Toss-up" because White is "running an effective campaign to capitalize on discontent directed at the incumbent."

White summed up the newest accusation simply at Friday's press event: "Rick Perry's helped his friends and his friends have helped Rick Perry. This is a pattern we've seen throughout the governorship."

It all comes back to the perennially controversial Texas Enterprise Fund. That's the business incentive fund lodged in the governor's office that lawmakers threatened to defund last session, while Texans for Public Justice accused Perry of rewriting compliance terms midway through a grant to give businesses an easy time.

The big issue is a bit of a "follow the money" operation, revealed and explained at length by the DMN, so hang on in there. In 2000, businessman Doug Jaffe sells two parcels of land in Horseshoe Bay to Republican State Senator and close Perry ally Troy Fraser. In 2001, Fraser sells one of the two parcels to Perry for $300,000: But an appraiser hired by the DMN estimated that it was worth $450,000, so Fraser let it go for $150,000 below market value.

Fast-forward to 2006: Perry announces that Sino Swearingen Aircraft Corp. will receive a $2.5 million grant from the Texas Enterprise Fund to build a new plant and create 850 new jobs. Only thing is, it turns out that Jaffe is an investor in the firm.

Now 2007 is where it gets interesting. Perry sells the plot on to Alan Moffatt, a business partner of none other than Jaffe. Moffatt buys the land for $1.15 million. It's impressive enough that, in a six year period, the property has increased in resale value by $850,000. Where Perry got really lucky is that, again, he found someone who didn't understand what the property is worth. The News appraiser pegged its real value as $800,000. So Perry made an extra $350,000 over the value.

To date, Sino Swearingen hasn't received any TEF money because it never produced the 850 jobs promised, and in fact got bought out in 2008 by the Dubai-based Emirates Investment and Development Corporation and renamed Emivest Aerospace Corporation. However, White argued that the value of being able to say they had been approved for a grant – either as a way to get incentives elsewhere or to leverage other financing – needs to be examined.

This isn't the Democrats' only line of attack on Perry's ethics. The Back to Basics PAC is also hitting Perry in another, older blurring of the lines between big business and his office. Perry is still feeling conservative kick-back over his attempt to mandate Human Papillomavirus vaccinations in 2007. Now Democrats are eagerly pointing out that his then-chief of staff (now Texas Transportation Commission chair) Deirdre Delisi the same day that pharma giant and vaccine manufacturer Merck gave his campaign $5,000. Now that's some awkward timing.

Then there's the Wyly Brothers, the Texas billionaires accused by the Securities and Exchange Commission of making $550 million profit of fraudulent trading. If the name sounds familiar, that's because it's the Wylys of Swiftboat funding fame. The question now is whether any of that went into the $400,000 that the brothers and their wives have donated over the years to Perry's campaigns.

Last, but far from least, over at EvictRick.com they're trying to keep Perry's absence from the governor's mansion in everyone's memory. Repairs started in 2007 when the Perry's moved out for renovation, and the job got a lot bigger in 2008 after a molotov cocktail set the place on fire (seriously, what the hell happened about the Cargo Pants Arsonist?) Two years and $22 million later (including $11 million in American Recovery and Reinvestment Act cash) and all there is to show is a closed section of Tenth Street and a lot of fencing. That the capitol dome restoration (a much smaller and less technically demanding project) will be started and finished in a fraction of the time would classify as "embarrassing" if it wasn't for the fact that Perry is being put up in a $9,000 a month mansion outside of town.

Undoubtedly, the Perry attack machine will hit back. But here's the rub. They haven't been very good at it this cycle. Their failed attempt to accuse White of profiteering during Hurricane Ike backfired badly: Their claims that he refuses to release his tax returns falls down when it's noted that he's actually exceeded state requirements; And they've got the added embarrassment of knowing that everyone is waiting for their boss to accede to calls for an election debate – something he continues to avoid.