Robots, contracts and the Sanders non-settlement 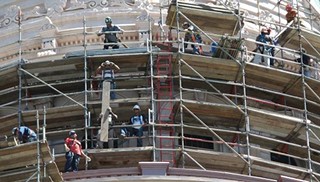 Construction work at the Capitol: At least something is going smoothly (Photo by Richard Whittaker)

Who said there was never any news in the Summertime? Between the continuing Nate Sanders II legal struggle, more details on the Formula One track, plus budget, transit and education news galore AND extra on the Cactus Cafe, it's been hectic times.

Turns out that the Austin Formula One project is being built just south of Austin in Elroy with Red's green. That's Red McCombs, who was revealed on Tuesday to be the project's big financial backer.

Equally massive was the decision by council on Thursday to reject a $750,000 settlement with the Sanders family. Good thing they have a better budget projection than expected, since they may need that for court bills instead.

While it seems that each member of council had their own reasons for opposing the settlement, the approval of extra staff for APD and a heated argument over bomb disposal robots raise some interesting questions about whether, to put it bluntly, the Austin Police Association gets what it wants from council.

Over at Capital Metro, former Lynx Central Florida Transportational Authority boss Linda Watson signed her contract as the local transit agency's new CEO. Quick hits from the deal include a $228,000 first year base salary, with potential for 4% annual raises across the five-year term.

Speaking of contracts, the Chronicle got hold of some more documents from UT Austin about the early negotiations between the Texas Union and KUT's management of the Cactus Cafe. The delayed revelations raise more questions about who knew what (or how little) and when.

On the pre-college front, Austin ISD got some good news in the state accountability ratings. However, there are real concerns that the projection measure, passed last session by the legislature, is nothing but a fudge factor. Between that and continuing concerns about the State Board of Education, it looks like the next session will see more school-related bills.

That is, if they've finished fixing the roof at the State Capitol by then.