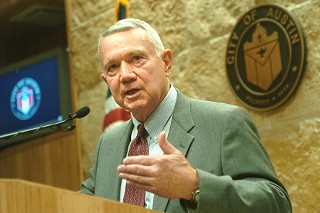 It's like this, that, and this and uh … (Photo by John Anderson)

It's been one year since Lee Leffingwell was sworn in as mayor, and it's time to take stock. The mayor's office has compiled a list of milestones from Year One, which we've reproduced below the fold.

Sent to us, per request, from the mayor's office:


Obviously, there's room for quibbling over whether the some of the initiatives touted are strong enough, what more is being done to prevent major flare-ups (i.e., KeyPoint and the questions raised) from occurring in the future, or whether leading the charge on WTP4 is something to be proud of. However, it's a reminder that results are important – especially as Leffingwell has been open about running for a second term.

A meeting with the (remaining) finalists for Austin Energy General Manager is going down at AE's Town Lake Center, 721 Barton Springs. 6pm.