Opinions on the incoming transit chief 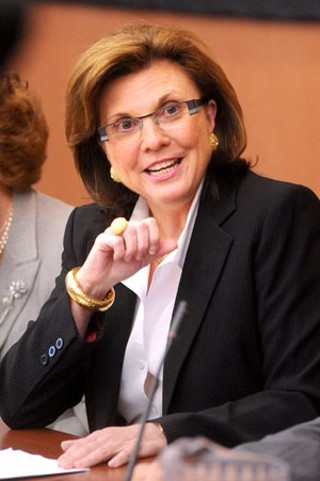 The Capital Metro Board of Directors today announced that it intends to hire Linda S. Watson as the next president and CEO of Austin’s transit agency. Watson is currently CEO of the LYNX transit system that serves a three-county region in the Orlando, Fla., area.

“This is arguably the most critical decision we’ll make as a board, regardless of how long we’re here, and I couldn’t be more happy with Linda Watson, the candidate we’ve chosen,” said board chair and Austin Mayor Pro Tem Mike Martinez.

“Ms. Watson’s experience, the tenure she’s had in the transportation industry, the relative current experience at LYNX in Orlando, really did set her far above the other candidates in the end.”

Watson’s only remaining competition at the end of the hiring process was Deborah Wathen Finn, a self-employed transportation industry consultant who had public sector experience in New Jersey and Buffalo.

Watson has been CEO in Orlando since 2004, but is a Texas native. Before moving to Florida, she ran Corpus Christi’s transit service 1996-2004, and held various positions with the Fort Worth service 1982-1996. According to the Orlando Sentinel, she currently earns $169,000 annually from Lynx. Martinez said she will be offered a salary that is “comparable to transit agency CEOs [of agencies] like Cap Metro.”

“I’m so excited,” Watson told the Chronicle from Orlando moments after the board vote, which was unanimous (board member Ann Stafford was absent due to illness). “I’ve spent a lot of time in Austin over the years because I lived in Texas most of my life. It’s a fabulous community.

“And then during the interview process, spending time there and getting to know the board members, I see their commitment to building a world-class transit system, and that excites me,” Watson said of her decision to pursue the job, which came open when embattled CEO Fred Gilliam retired last September. “Doing my research on it, I found the transit system has a tremendous amount of talent and has a lot of big things to offer the community. To be a part of all that in such a wonderful community is just extremely exciting to me, so I’m very happy.”

Board Member John Langmore said a consensus on Watson had been reached at the board’s closed-door Monday meeting, but the board sent him on a Tuesday junket to Orlando to vet her just a little more.

“I went to Orlando for a day and met three of her current board members, three of her staff, and the head of the union, and there was nothing but universal praise,” Langmore said from the dais. Afterward, he told reporters “I could not extract a single negative comment about Linda or her performance from any of them. They said her and her team really turned around LYNX. It had really similar circumstances [to Capital Metro]: a new board imposed by statute, and a troubled past.”

"She came into LYNX at a time when its reputation was not so great and was able to manage it in a way to re-establish the public's confidence in the agency," Orlando Mayor Buddy Dyer, a LYNX board member, told the Sentinel today. "She managed it in difficult economic times and really righted the ship at Lynx. It's a well-thought-of and well-run organization now."

(For an overview of the multiple challenges Watson will face to turn Cap Met around, see "Welcome to Capital Metro" in today's issue of the Chronicle.)

Asked if there was anything from LYNX that he’d like Watson to bring to Austin, Martinez said, “Other than community confidence? No. That’s huge.”

Not everyone in the community has that confidence. Disability rights activist Diane Bomar Aleman, chair of Cap Met’s Access Advisory Committee and the Metro Mobility Working Group (the latter a court-created body resulting from a lawsuit settlement with Cap Met) openly lobbied against Watson for what Aleman describes as LYNX’s failure to comply with the American With Disabilities Act.

“I think this is a huge mistake,” Aleman said after the vote. “It shows they don’t want change. Linda Watson is Fred Gilliam in a skirt. Her agency is not comparable to Austin, she’s not qualified, and she doesn’t use mass transit herself. It’s business as usual.” (Watson admitted to not being a regular LYNX rider at a community forum last month, but asserted LYNX is fully ADA-compliant.)

“It’s not just about the disability community,” added Aleman, who is visually impaired and lobbies heavily for improvements to paratransit services. “I feel she got in because of the business community and the Downtown Austin Alliance.” (The latter was a driving force in bringing commuter rail to Austin, which Aleman and some others say takes resources from those who are transit-dependent and gives them to those who already have other transportation choices.)

Asked what it would take to win her over, Aleman said, “She needs to listen to what the Access Advisory Committee and the MMWG are saying about the illegal ADA violations that are going on, and have a full investigation by the [Federal Transit Administration] and a full compliance review.”

That opinion is not unanimous within the disability community – Jennifer McPhail of the Austin chapter of ADAPT, which lobbies for improved access to regular fixed-route service for those with mobility impairments, said “I’m just looking forward to having a clean slate” with a new board president.

(For more on transit-dependent people’s struggles with Capital Metro, read “Can’t Get There From Here,” Jan. 22.)

Another interest group Watson will have to deal with is the drivers and mechanics union. The Chronicle was unable to reach Jay Wyatt, president of Amalgamated Transit Union Local 1091, but after the board meeting, ATU member Michael Wood told reporters, “We figured [Watson] would work well with the union. She’s a people person. We need a person that’s really down to earth.”

Aleman said she’d had high hopes for Wathen Finn, but Martinez said Watson’s more recent public-sector experience gave her an edge. Wathen Finn most recently had been a private-sector consultant, and her most recent public-sector job had been as director of surface transportation with the Niagara Frontier Transportation Authority in Buffalo in 2001, and before that with New Jersey Transit and the Port Authority of New York & New Jersey.

“I can only speak for myself,” Martinez said, but “I couldn’t go to Buffalo, I couldn’t call Buffalo and talk to folks in Buffalo who had recent relative experience with her. This was decades-old experience. That factored in for me, that I couldn’t talk to somebody who had just worked with her within the past decade.”

Martinez also restated his plea for interim CEO Doug Allen to stay with the agency, despite not being retained as top dog.

“Once again, I want to emphasize how grateful I am for Doug’s leadership, for the work he provided at Cap Metro in this interim process, and I personally will make another request that he consider staying here in Austin and helping us continue to move this agency forward,” Martinez said. Allen was not at the board meeting, but has thus far only said that he intends to help with the transition to a new leader.