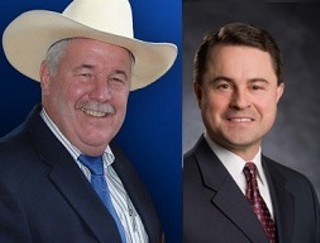 Hank Gilbert (l) and Todd Staples: It depends on how you define "predominantly."

In campaigning, the devil is in the detail. Like Gov. Rick Perry standing in front of what looked like Soviet-era art at his Republican Party of Texas convention speech or Sarah Palin's plan to visit Margaret Thatcher – who now has clinical dementia. Just ask Agriculture Commissioner Todd Staples and challenger Hank Gilbert.

Staples' new problem is a memo being touted by his Democratic opponent. The memo, dated May 11, is a reminder to Texas Department of Agriculture staff of acceptable behavior for a state employee during campaign season. It's all very pro forma stuff (yes, you can make campaign contributions, no, you can't phone bank from your office desk). But it's one paragraph that has caught the Gilbert campaign's eye:

All incoming predominantly political e-mail correspondence shall be considered misdirected email. All misdirected e-mail shall be forwarded to admin@toddstaples.com and then deleted.

The Gilbert campaign argues that the use of the word "predominantly" opens up some nasty opportunities for Staples' people at TDA to bury emails damaging to the Staples campaign. More worryingly, Gilbert' campaign manager Vince Leibowitz suggested this could lead to violations of the state's open records rules. He wrote, "By even the most liberal definition outlined in state records retention schedules and the Texas Administrative Code, the Texas Department of Agriculture shouldn't be instructing staff to delete these emails."

This isn't the first time that Staples found himself under scrutiny for blurring the lines between his office and his campaign. Last year he appeared in a PSA that looked a lot like a campaign ad. Gilbert's campaign picked up on that last November but got little traction, so time will tell who this latest blast will hurt.

Perry's blunder merely re-enforces the old joke that, for all his talk about Socialism, he wouldn't know a Stalinist from a photo-op. Palin's suggestion for a photo op with the Iron Lady (or, as anyone from Scotland or the North of England recalls her, That Bloody Woman) is either an attempt to take advantage of a senile old woman or another sign of her own cluelessness. But they're both pretty obvious: For Gilbert's complaint to work requires voters to interpret one word – "predominantly." Valid as it may be, that may be too opaque a concept for many voters to grasp.

So whose campaign fail will this turn out to be? Staples', Gilbert's, or the electorates?

More This Week in Campaign Fail

Redrawing History in HD47
Workman campaign breaks out the Photoshop