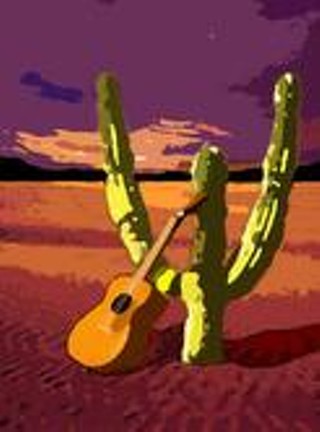 "Welcome to KUT," Vice-President of Student Affairs Juan Gonzalez joked. To the surprise of few, the Texas Union announced this afternoon that it will entering a deal with KUT-FM, Austin's NPR affiliate, to keep the Cactus Cafe open.

Gonzalez made the announcement in front of a small group of invited media (representatives of both the Student Friends of the Cactus Cafe and the Friends of the Cactus Cafe were left in the hallway, and it took some negotiation and eventually the intervention of Vice-President of Public Affairs Don Hale to get student media in the room.) Along with KUT programming director Hawk Mendenhall and general manager Stewart Vanderwilt, he laid out the broad outline of the plan.

So what's on the table?

The quick breakdown: The Texas Union will still maintain operations of the bar both day and night. KUT will take over the music side, booking around 200 nights year round. After the massive amount of student input, Gonzalez said the aim was for the cafe "to operate as close to its previous function as possible." The new deal takes effect in August but, he added, "the precise evening has not been determined yet."

The upside for the Texas Union: Gonzalez called it "a perfect match, because [KUT has] an organization that has deep relations with the music industry and songwriters, and knows how to run a sound business, and has wonderful support within the community for its already ongoing operations." Vanderwilt added, "We're the per capita most listened to public radio station in the country, currently the number one station in Austin [and] we're constantly in touch with how this musical community is evolving."

The upside for KUT: Mendenhall said, "Our music team is really excited about being able to include live performances from the Cactus in what we do."

The finances: Possibly, and surprisingly, the area with the least clarity. Since there is no contract or even seemingly a letter on intent, this will take a lot of work. While Vanderwilt pointed out that, as two UT agencies, "We're all in the same family," it's unlikely that UT's legal department will not ask for something more detailed or binding.

The profits: The broad outline is that the two halves of the business will remain at some level separate. The union will keep revenues from the bar, and KUT will keep the revenue from the marketing side. Where the answers got hazy was on areas like shared areas like merchandising.

The losses: Vanderwilt put emphasis on fitting the venue into the station's traditional business model, which has always involved fundraising drives. However, Gonzalez said bluntly that the union will not subsidize the bar operations with student fees. As for what happens if the bar loses money but the music makes a profit (or vice versa), that's yet to be fully resolved.

The employees: The union will be hiring staff, just not necessarily the old staff. Gonzalez said that the current staff have all been offered alternative employment, but will be free to apply when the cafe fills these newly (re)created vacancies. Vanderwilt added that KUT will create a new post, a full time management position, to run its musical operations at the cafe. Speculation is already rife about whether current manager Griff Luneburg (the one employee not offered a permanent contract by the union) will be in contention.

What about expanding student involvement? Gonzalez said that part one of that process involves extending and changing the bands booked "to better match [students'] flavor of entertainment." As for actual roles in day-to-day operations, internships, etc, etc etc, Gonzalez called this "absolutely pivotal," but there are no solid plans at this point, just a lot of options that haven't been ruled out or in.