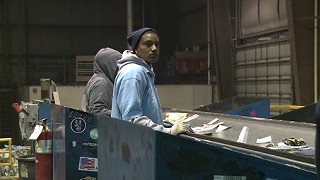 We’ve gone over a lot from last week’s council meeting, but haven’t touched on the finalists to build a materials recovery facility, or MRF, to sort the city’s recyclables. While the three presentations were interesting, what council didn’t hear drew just as much attention.

The road to construction of a local MRF to take on the city’s single-stream recyclables has had more stops and starts than a trash truck on bulk pickup day. The vacillation on whether to renew the city’s money-losing contract with Greenstar, who had to truck our stuff out of town; the ruling Greenstar and Texas Disposal Systems violating the city’s anti-lobbying ordinance by contacting council; and TDS’ decision to circumvent the application process by submitting the MRF proposal as an addendum to an existing contract they held with the city.

City legal ruled the TDS proposal was ineligible, but as the council heard 20 minute presentations from the three staff-designated finalists – Allied Waste Services of Austin, Waste Management Recycle America, and Balcones Resources – it was clear they wished to gauge TDS’ offer against the others. (TDS offered to take the city’s stream immediately, at no cost, and give the city 100% of recyclable sales until that totaled a years’ operating cost, then split the spoils 50/50 with the city.)

A showdown of sorts with the legal department (the Hustle’s favorite kind) ensued soonafter, with the following exchange between Lee Leffingwell and assistant city attorney Cary Grace, culled from the transcript:

Lee Leffingwell: It still seems that it would be interesting to … compare side by side so that we would be able to see if there's some big discrepancy, big advantage or disadvantage. So you are saying even the information contained in the proposal, even though … you would say in advance that … this particular bidder is disqualified, that the information in the report can't even … be disclosed?

LL: Would you like to think about it further?

CG: My boss might help me out in this. … I think that, that again that just goes back to the same, my same statement about the city may make the decision to go through the process in a competitive matter and we have to follow our own rules to do that.

LL: I understand that you are maybe prevented from awarding a contract because of rules violations. I'm having a hard time understanding why the information contained therein can't be disclosed.

CG: I think – I think it could certainly be discussed.

TDH will have more about MRFs in this Thursday’s paper.

On the city calendar: A meet and greet with Capital Metro CEO finalists Deborah Wathen Finn and Linda S. Watson is happening today at the IBC Bank conference room, 2817 E. Cesar Chavez, from 3-5pm. (That’s served by the 17, 300, 320 routes, riders.)

The Urban Renewal Board gathers at the Street-Jones Building, Room 400A, 1000 East 11th. They’ll see if the Austin Revitalization Authority has anything interesting to say in their presentation to the URB.