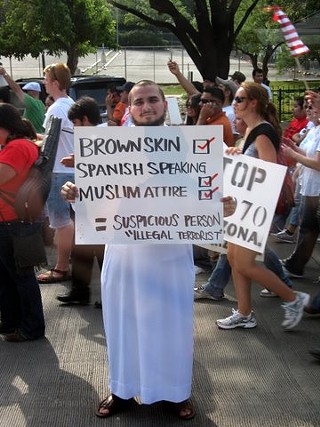 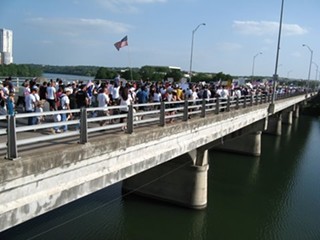 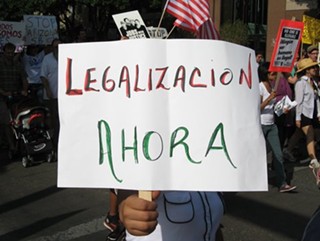 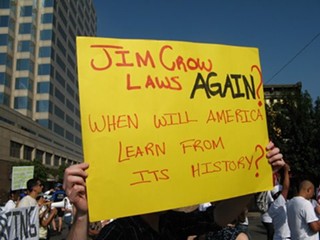 What are the biggest differences between the tea party crew and the immigration reform advocates that marched in Austin this weekend? Well, for a start, grammar.

Saturday's rally at the Capitol (followed by a long hike down across Lady Bird Lake and back to City Hall) was a combination of protest against Arizona's unconstitutional Senate Bill 1070 (AKA the "Where are your papers?" bill), a DREAM act rally, and a call for meaningful immigration reform. It was massive, polite, and the banners were literate. One sign writer with a spelling mistake even went so far as to cover their mistake with another piece of paper and correct the error.

Wow, that makes a change.

The Internet is awash with misspelled Tea Party signs. As the good people at Buzzfeed have proved, even mocking them has even crossed from situationist art prank to full-blown sport. It's got to the point that Gov. Rick Perry has started warning about liberal infiltrators making them look silly.

Compare that to Saturday's immigration reform rally. First off, the low-end estimates put the crowd at around 10,000. That beats the highest estimate for an Austin tea bag event (1,500 last summer), which steadily shrank to less than a hundred at Hands Off Texas rally last September, and dwindled to the mighty total of two, yes two teabaggers that turned up at City Hall for the April tax day protests (although we're still waiting for the right wing blogosphere to claim it was a million.) Perry might want to reconsider that warning about liberal infiltrators: Seems like the teabaggers might want all the help they can get.

But here's the serious point: Raucous and photo-friendly as it was, the Tea Party is a distraction from the pressing issues. If turn-out is anything to go by, the lack of meaningful immigration reform is what's really got people concerned.