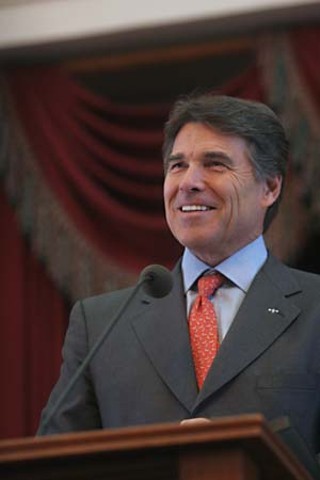 Gov. Perry: If everyone's a critic, why so shy? (Photo by Jana Birchum)

For a while it looked like Lt. Gov. David Dewhurst was going to get all the conservative plaudits for strong-arming Tarleton State students into canceling a play. Now the Conservative Republicans of Texas want everyone to know that Gov. Rick Perry is just as good at playing censor.

The scandal over how Dewhurst joined the angry mob over a one-act student workshop production of Terrence McNally's Corpus Christi caused outrage in Texas and made national headlines. The consensus seemed to be that Dewhurst was just engaging in some headline-grabbing: Seems now he was the front man for some more complicated shenanigans.

In a "thank you" note on the Texas GOP Vote website, Conservative Republicans of Texas President Steve Hotze gives credit (a-hem) to Dewhurst for his moment of censoriousness, but then adds this interesting little factoid:

We also owe a debt of gratitude to Governor Perry for his behind the scenes work to stop the play at Tarleton State. Ray Sullivan, the Governor’s Chief of Staff, was notified of the play on Thursday and after discussing it with the Governor, the necessary steps were taken to ensure that its performance was canceled.

As noted by Burnt Orange Report, Hotze was the guy behind the gay-baiting mailers in the campaign against Houston Mayor Annise Parker.

Of course, the big question this all raises is simple: Why do Paul Burka and his ex-boss Evan Smith keeping trying so hard to get people talking about Perry for president in 2012?