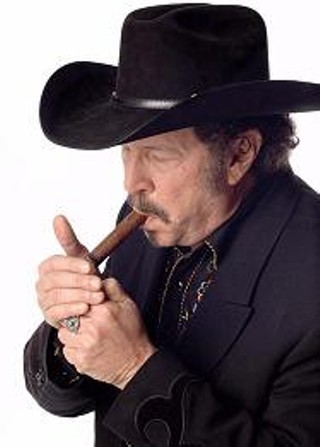 Friedman: Yeah, you were a Democrat, but what are you now?

After his defeat in this year's Democratic agriculture commissioner primary, Dems may be glad to see Kinky Friedman is raising campaign cash for other candidates. Oh, hang on, he's fundraising for Republican Congressman Lamar Smith's Longhorn PAC.

According to an invite obtained by Burnt Orange Report, the Kinkster will be attending the Eighth Annual Weekend with Lamar in Austin in May. The money from that goes to the supposedly non-partisan PAC, which has really been a cash supply for wingnut Republicans like Congresswoman Michele Bachmann and DINOs like former Congressman Henry Bonilla.

A lot of Democratic activists and journalists always doubted Friedman's attachment to the Democratic party, and blamed him and Carole Keaton Strayhorn for turning the 2006 gubernatorial elections into a joke (the punchline of which was Gov. Rick Perry winning again.) Famously, Friedman once said that "I was a Democrat before you were born." Funny, so was Senator Strom Thurmond, Alabama Governor George Wallace and former Republican House Speaker Tom Craddick.