No 2010 bond referendum for urban rail 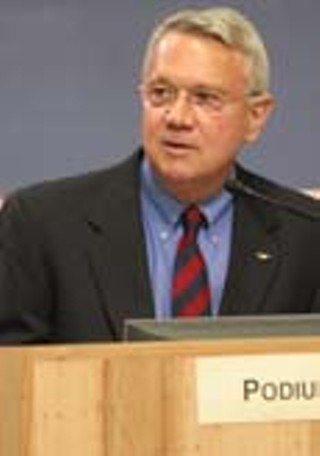 Leffingwell: Will sell no rail line before its time. (Photo by John Anderson)

On his mayoral web site, Mayor Lee Leffingwell just announced he's killing Austin voters' opportunity to approve bond funding for urban rail in November. Council was to vote on this next month; however, the mayor's announcement effectively closes that door. "We have discussed this at length with the entire council," said aide Mark Nathan. Text follows.

After countless conversations and careful consideration over the past few weeks, I have come to the conclusion that it is not feasible for the City to bring a fully developed urban rail proposal to Austin voters this November.

Given especially that I made a commitment last year as a candidate for mayor to pursue an urban rail election as soon as this November, I have not reached this conclusion lightly.

However, it has become clear to me over the past few weeks that critical questions about the City’s urban rail proposal – questions that voters need and deserve to have the answers to – will in fact remain unanswered until after November.

Specifically, it is now clear that the City will not be prepared before November to propose an exact rail route across Lady Bird Lake, creating uncertainty and leaving an unacceptable variable in the construction cost estimate for the first phase of the system.

In addition, it now appears that the City is unlikely to be in a position before November to present voters with a final proposal for partnering with a specific entity to operate the urban rail system.

Further, I am not satisfied at this point that a City plan to minimize the impact of rail construction on Austin commuters and local business owners will be sufficiently developed before November.

Finally, I believe the City has more work to do to present a clear picture of what subsequent phases of an urban rail system might look like, how construction and operation of those later phases might be financed, and exactly what role we can expect federal funding to play.

With all of that said, it’s also true that the City has made significant strides over the past nine months toward developing a thorough, thoughtful urban rail proposal. Many of the questions about urban rail that need answers will in fact have them, some well before November.

This is due entirely to the hard work of City staff – especially City Manager Marc Ott, Assistant City Manager Robert Goode, and Transportation Director Rob Spillar – as well as City Council members and a host of supportive community leaders, including the members of the CAMPO Transit Working Group.

Any blame for failing to meet the November 2010 goal rests firmly with me. In retrospect, the timeline I supported was overly ambitious, failing to fully recognize the complexity of developing the urban rail proposal and overestimating the speed at which the City would be able to do so.

So, while I am disappointed that we will not be ready to proceed with an election this November, I am nonetheless optimistic that all of the good work that has been done so far puts the City on a trajectory to answer each of the critical questions about urban rail in the very near future.

My hope and expectation is that the City will be ready to proceed with an election before the end of 2011. However, moving forward, the determining factor for holding a rail election must be the completeness of the proposal, not an imposed deadline. This is one of the critical lessons of the Red Line: On urban rail, we will only promise what we know we can deliver.

Over the next few weeks, my office and City staff will be working with City Council members and community leaders to revise the City’s approach to further developing the urban rail proposal, as well as the City’s overarching Strategic Mobility Plan. Our goal moving forward will be to maximize stakeholder input, as well as the amount of time that City Council members and community leaders ultimately have to review the final urban rail proposal.

To be clear, I remain as committed to urban rail as ever. I continue to believe that a well-conceived urban rail system is the best investment we can make to help ensure the ongoing development of downtown Austin, to help fight traffic congestion, to help promote sustainable growth and protect our environment, and to help keep Austin competitive with our peer cities, many of whom are now investing billions in urban and commuter rail systems.

If anything, this delay reflects our determination to get urban rail right – and we will.

In the meantime, we know that our transportation problems are not going to solve themselves. I have said many times before that doing nothing is not an option if we want to help relieve Austin’s crippling traffic congestion, plainly one of the greatest threats to our quality of life.

That’s why I continue to strongly support a transportation bond referendum this November to give Austin voters the chance to make investments in roads, sidewalks, bike lanes, and trails. I don’t know of any good reason to wait to make these much-needed transportation investments.

Currently, the City has the capacity to issue up to $200 million in bond debt without requiring an increase in our tax rate. So in the next two weeks, I’ll be bringing a proposal to the City Council to direct City staff to prepare a transportation bond proposal totaling half of that amount – a $100 million package of investments in roads, sidewalks, bike lanes, and trails.

Based on the work that has been done so far, I trust City staff’s ability to craft this package of proposed investments in short order, giving the City Council, community leaders, and Austin voters ample time to review the proposal before voting on it.

If approved by the City Council, this approach will allow us to make some near-term progress on critical transportation infrastructure, while still retaining half of the bonding capacity we have at our current tax rate to devote to a future transportation proposal that includes the first phase of an urban rail system.

While I had obviously hoped nine months ago that we would be further along on urban rail than we are today, I know today that taking a little more time now to ensure that we ultimately put forward a well-developed proposal is the right thing to do.

As we rededicate ourselves to that objective, I ask for your ongoing involvement and your active support for other important steps forward we can take this year to begin to help solve Austin’s traffic crisis.

Please don’t hesitate to contact me with questions or concerns.

I strongly support Mayor Leffingwell’s position on delaying consideration of the City’s urban rail proposal until more planning has been done and more details have been finalized. As the newly-elected Chair of the Board of Capital Metro, I’m particularly sensitive to the need to ensure that promises made are promises kept. Like the mayor, I’m convinced that urban rail will ultimately be vital to the success of our overall transportation system in Austin and Central Texas, especially as commuter rail now begins to become a central component of that system. I believe this delay will also allow Capital Metro to demonstrate the utility of rail transit in Austin vis-à-vis the Red Line, which I am confident will be a success after it begins operations on March 22.

I also strongly support the mayor’s proposal to proceed with a $100 million transportation bond referendum this November focused on roads, sidewalks, bike lanes, and trails. We know that solving our traffic problems will require a generations-long, multi-modal approach, and I see no reason to wait to pursue investments we know we need to make.