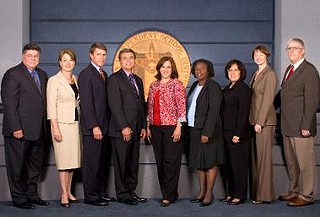 The AISD Board of Trustees (for now)

For a while, it seemed unclear how much new blood would be running for the Austin ISD Board of Trustees on May 8. Now the two incumbents who faced challengers get a clean walk, the two who were challenger-free initially are now in competitive races, and the empty seat is a brawl. So who is running for what? (* denotes incumbent)

District 1: Cheryl Bradley*, Cassandra Enoch Brown
Brown backed out unexpectedly to run in place 9 (see below): Considering how crowded that race is, she may regret that switch soon.

District 7: Warren Faulkner, Robert Schneider*
Arguably the toughest race for an incumbent. Faulkner was assistant head of Kiker Elementary, and there are still some bruised feelings about the recent attendance zone reshuffle that affected the school. Schneider has already said he believes that's a driving force behind the challenge.

Place 9 At-Large: Tamala Barksdale, Cassandra Enoch Brown, Julie Cowan, Dianne T. Mendoza, Mike Reed
Ah, place 9, the place to be since Karen Dulaney Smith announced she is standing down. Brown and Reed switched races (not voluntarily in Reed's case) but they face some weighty competition. Cowan is arguably the most seasoned in AISD politics: Currently on the district's 2009-10 English-Language Arts textbook adoption committee, she previously served on the 2008 Bond Advisory Committee, the 2008 Middle School Strategic Plan task force, and the 2007 and 2008 budget task forces. Barksdale works for progressive social networkers Enviromedia, and has already picked up Council Member Randi Shade, former Mayor Will Wynn and AFSCME heavy hitter Jack Kirfman on her endorsement list. Mendoza isn't doing badly on that front either: The Capital Metro vice-president got her own ex-mayor (Ron Kessler), her own council member (Mayor Pro Tem Mike Martinez) [actually, there's an embarrassing update about her claims for both those gentlemen] and her own established political figures (including former county commissioner Richard Moya, father to trustee Lori.)

While it's a good sign for the state of the district that there are people willing to run for the board (as Education Austin President Louis Malfaro said in recent conversation, he feels contested elections are helpful if only because it means incumbents have to explain their policy stances before they get to a vote), it may not be so helpful that everyone is crowded in place 9.

There's also the question of how the new-look board will function without Dulaney Smith. Her exit evokes some memories of former council member Betty Dunkerley, to whom council left the budget construction. At the time, even some council members said they may have depended on her too much. Similarly, it's Dulaney Smith and fellow trustee Annette LoVoi who really break down the numbers on any district presentation.