Acevedo Up for Job in Dallas 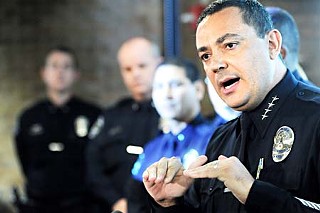 Austin Police Chief Art Acevedo announced Monday night that he has been named one of six finalists being considered for chief of the Dallas Police Dept. In a statement, Acevedo said that he wanted to "make clear" that he applied for the job because it was an "opportunity that was presented to me," not one that he sought out.

That said, the "lifespan" of a major city chief is between three and five years, he said, "which I am quickly approaching." Acevedo, who came to Austin in mid-2007, appears to be keeping his options open.

Whether Acevedo might be able to use the opportunity as a way to leverage some greater job security – and perhaps a pay raise from his $181,480 annual pay – remains to be seen. He works without a contract, he noted in his statement, and thus it is important that he keep his "options open." Still, "I want to assure the men and women of the [APD] that I very much enjoy my work with this great department," he said. "Together, we have made extraordinary progress in our efforts to make APD one of the nation's finest law enforcement agencies."