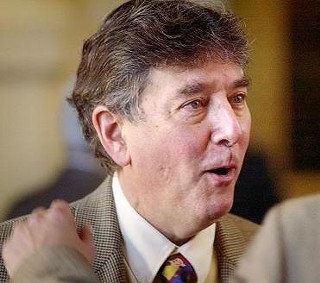 Rep. Naishtat: The students' friend, now a friend to the Student Friends (Photo by Jack Anderson)

If you oppose the closure of the Cactus Cafe and the termination of the Informal Classes program, and you're taking your lunch break near University of Texas campus, you may think about dropping by the Student Friends of the Cactus Cafe rally taking place right now on the western steps of the UT tower.

The student group has its own proposal to save the Cactus, which has been backed by Friends of the Cactus Cafe, and is in direct opposition to the administration-friendly plan being promoted by Student Government (see this week's Off The Record for more on that.)

What may be most worrying for the UT administration is that both Council Member Laura Morrison and Democratic state Rep. Elliott Naishtat, whose district covers UT, will be speaking at the rally. Naishtat has already warned the UT admin that "the potential damage to our community's involvement in university life". He was subtler when he noted that the Travis County delegation has always been a good friend to UT.

What Naishtat didn't mention was that, sometimes, the best friends are those that have the courage to tell you that you're being a total tool.

Student Friends of the Cactus Cafe, a recently formed UT student organization, will hold a rally, open to the public, tomorrow from 11:30 AM to 2:00 PM on the UT West Mall Rally Space at the west steps of the Texas Tower.

Speakers slated to talk at the rally are State Representative Elliott Naishtat (at 12:05), City Council member Laura Morrison (at 12:30) and Austin Music Commission chairman, Brad Stein (immediately after Laura Morrison). Members of Student Friends of the Cactus Cafe and Friends of the Cactus Cafe will also make remarks. Music will be provided throughout the rally by Sara Hickman, Bill Oliver, David Garza, Barbara K and Richard Bowden and Elizabeth Wills.