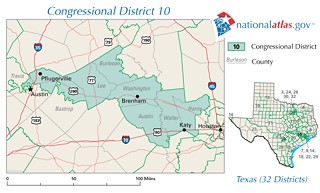 Austinites live in districts 10, 21, 25, and 31. Click through to see maps of all four districts. (maps courtesy of nationalatlas.gov)

The story of this year's Austin-area Congressional elections is that there is no story. Since 2004 (the first year Tom DeLay's re-redistricting took effect), Austin's reps in Washington have been Republicans Lamar Smith, Michael McCaul, and John Carter, and Democrat Lloyd Doggett, and there's little reason to believe that will change this year.

The only real surprise thus far is that Tea Party discontent has raised up primary challengers for all three GOP incumbents – but all are apparently amateur campaigns against congressmen with firm party establishment support. Simply put, in districts as sprawling as these, unless you have money to get out your message, you have no chance – and the challengers don't have it.

In the Republican primaries:

Up against McCaul (Dist. 10, which reaches from West Lake Hills all the way to Houston) are Austin physician Rick Martin and Pflugerville program manager Joe Petronis. Martin doesn't even show up in Federal Election Commission campaign finance reports, while Petronis raised $31,200 as of Sept. 30, of which $20,308 came from his own pocket. He takes that into battle against McCaul's $889,052, and McCaul can tap into the Clear Channel media fortune whenever he wishes (he married into it).

Same in the other races: Unknown retiree Raymond Yamka of Georgetown (Dist. 31, Williamson County north to Stephenville) likely can't match Carter's quarter-million, nor can Leander businessman Stephen Schoppe (Dist. 21, western Travis County, down to San Antonio, and into the Hill Country) threaten Smith, who has held office since Schoppe was 11 years old and has a million dollars at his disposal.

Similarly, Dist. 25 (southeast Travis, extending southeast) has a couple of lightweights who hope to take on Doggett in November. Columbus physician Donna Campbell has a paltry $24,804 and LaGrange environmental contractor George Morovich lists "negative $8,813" in his account.

Doggett, in Congress since 1994, will likely roll over Campbell or Morovich in November because the bulk of Dist. 25's population is in heavily Democratic southeast Travis County.

Retired Navy Captain Ted Ankrum of Cypress gave Dems hope of someday unseating McCaul when, in 2006 with only $66,000, he took 40% of the vote. But those turned out to be pipe dreams in 2008 when Larry Joe Doherty's $1.1 million yielded only an additional 3%, even in the year of Obama fever. This year, Perficient CEO Jack McDonald was supposed to be the strongest knight yet, and showed enormous fundraising ability, but inscrutably bailed out at filing time. So at the last minute, Ankrum decided he'd give it another go. He'll need to run a far more professional campaign than four years ago.

In Dist. 25, Austin real estate broker Lainey Melnick will likely pose no threat to Smith in November – she doesn't have the dollars, and the district just doesn't have the Democrats. No Democrat has filed in Dist. 31 – probably a wise move, since the best challenger to Carter thus far has pulled only 39%.

[Editor's note: This story was originally intended to run in the Feb. 26 print edition, but was inadvertently left out.]