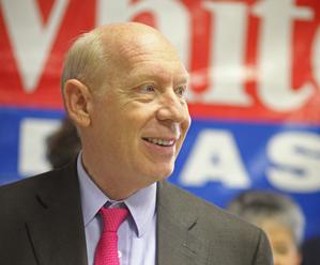 Bill White: Reasons to be cheerful (Photo by Jana Birchum)

Not all of the Democratic gubernatorial hopefuls have filed their reports yet. Due to state rules, the Texas Ethics Commission can't release them for any candidates in this primary (these figures were obtained directly from the White campaign.) So everyone has to wait to see how much money Farouk Shami has loaned himself this time.

While White still lags behind the GOP crowd in the cash-on-hand column (see graph below), that comes with two notes attached. First, he only started running for this race in December. Second, he's barely having to spend a single cent to keep his position as lead candidate in the Democratic primary. The real test is going to be about who's war chest looks healthiest after the March 2 election and any potential runoff.

In other state races, Democratic agriculture commissioner Hank Gilbert didn't raise any cash, but still has about $100,000 cash on hand (that's roughly $33,000 more than Kinky Friedman.) Like withe the Dem governor's race, here's a hold-out in the Democratic lite guv fight, so those numbers are still pending.

As for the Republican legislative primaries in Austin, late filer David Sewell put on a sudden spurt, raising $26,125 in January. Holly White Turner pulled in $6,240 in House District 47, while Paul Workman's revenue stream dried up a little with only $2,550 (a big decline from the $72,915 he raised from the end of October to the end of the year.) Up in HD-50 Ryan Lambert's $1,302 funds raised seems slight compared to Patrick McGuinness' $5,380. However, incumbent Democrat Rep. Mark Strama (who's latest filings are still being processed) raised $47,630 in the six months when he didn't think he had a general election challenger.

Headline numbers from the governor's race below: