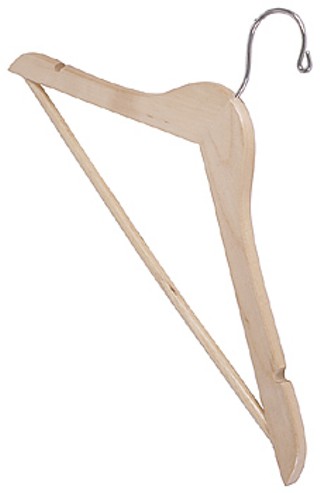 A hanger: one of the fine products Hanger Orthopedics doesn't make.

To the surprise of absolutely no one, today the City Council unanimously approved an incentive program with Hanger Orthopedic Group, offering them $50,000 a year for ten years for the company to relocate their corporate headquarters here.

The program, which we’ve written about here and here, seemed destined for approval from the start, considering Hanger’s stable, century-plus history, their status as a medical company (an industry Austin’s clamoring to enter), and the low cost of the incentives versus the relatively well-paying jobs it will create, to name a few factors.

The local organization paying most attention to the process has been Austin Interfaith, which advocates city-incentivized jobs pay a livable wage of $18 an hour, or $37,000 yearly. Their arguably-overenthusiastic entreaties drew a rebuke from Randi Shade last council meeting (Feb. 21), as she took AI members to task for writing in a Statesman editorial that "the City of Austin gave $64 million in public tax subsidies to companies that created 1,400 jobs — about $46,000 per job.” Shade noted while that cash is allocated for incentives, it’s dependent on the companies creating jobs continuing to abide by the terms of their agreement with the city; to date, Shade said, the city’s paid around $5.2 million. “If you're going to hold us accountable, then I thought we ought to be able to do the same,” she said, referencing the group's sometime severe "accountability sessions" with candidates.

But it was all Kumbaya in chambers today, with AI’s Louis Malfaro calling the incentive “a fair deal for taxpayers,” but noting the group would continue to work on two of the Hanger deal’s aspects in future incentive programs: instituting a “base wage” for all hires, and ensuring company relocations are bullish on local hiring – not just trucking employees from across the country.

After the vote, Shade sent the Hustle a note about local hiring:

One thing I said last week and should have reminded folks this week is that Hanger already has local employees – 19 working here as a wholly owned subsidiary called Innovative Neutronics. Hanger has grown by acquisition in recent years and IN is an incredible local story – they invented the WalkAide which enables people with foot drop to be able to walk without canes and/or walkers – it is a small bluetooth device that sends an electric pulse from knee to foot. Very cool device developed here in Austin and now the HQ for the company is moving here. … local effort helped drive this decision.

If all the Hanger excitement wasn’t enough, the city’s already soliciting input on their next potential economic development program with online legal doc generator LegalZoom (you know, the company with OJ’s buddy Robert Shapiro in the commercials). You can weigh in here.