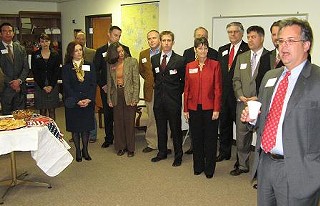 Tracking every candidate for every race can be a chore, but there is still no unified list of Republican filers for the March 2 primaries. The GOP House committee, state party and Travis County party lists are still being brought together centrally (Democrats can't laugh too much: There was lag getting the Harris filings collated with the state list).

The governor's race is obviously the big one, and it settled as a three-way dance between Gov. Rick Perry, Sen. Kay Bailey Hutchison, and dark horse secessionist Debra Medina, who is now being taken seriously enough to be invited to the KERA Republican primary debate in Dallas on Jan 14. As for the rest of the statewide incumbents, everyone save Railroad Commissioner Victor Carillo avoided a primary challenger, so Lt. Gov. David Dewhurst, Ag Commish Todd Staples, Land Commish Jerry Patterson and Attorney General Greg Abbott all just have to wait to see which Democrat they face come November. Comptroller Susan Combs may have it even easier, with no Democrat filed (she's still got some Libertarians gunning for her, though). Carillo has to get past Giddings CPA David Porter before he can think about November.

Proving the old mantra that you've got to be in it to win it, there was a flash flood of late GOP filings in both chambers on Monday. Attorney/psychologist/divorce recovery coach Mary Lou Serafine has filed against Sen. Kirk Watson, D-Austin, in Senate District 14. On the House side, Glenn Bass moved races (see county below) to give former Denver Bronco and GOPAC-TX member Dan Neil a clear shot at Rep. Donna Howard, D-Austin. However, the one known Travis County GOP primary (Holly White Turner versus Paul Workman in Rep. Valinda Bolton's HD-47 seat) became a three-horse race with the arrival of tax attorney David Sewell. Meanwhile Rep. Mark Strama, D-Austin, drew a surprise double-header of GOP opponents as semiconductor engineer Patrick McGuinness and firefighter Ryan Lambert both filed last minute. Meanwhile, Travis County's only legislative incumbent, Sen. Jeff Wentworth, R-San Antonio, goes without a primary challenger.

Statewide, there are at least 30 House GOP primaries, several involving incumbents, which could end up burning through a lot of cash and energy. On the other hand, even ingenue candidates can tie down Democrats in their district in a year when the statewide ticket was hoping for a lot of well-connected supporters with time on their hands.

Who knew so many people cared? Place 5 incumbent Ken Mercer faces a primary challenge from San Antonio attorney Tim Tuggey, before facing the winner of the four-way-fight in the Democratic primary. Up in Place 5, the ever-controversial Cynthia Dunbar may have stepped down, but her shadow is still over the race. Georgetown education consultant Marsha Farney and Round Rock ISD teacher Rebecca Osborne are in against Dunbar's hand-picked heir apparent, the equally conservative State Republican Executive Committee member Brian Russell.

Seems like the GOP has steered well clear of the district court races in Travis County (except Jeff Rose in the 353rd, who only got the job because he was appointed to it when Judge Scott Ozmun died), but there's a mad rush to replace outgoing Democratic Justice Jan Patterson in the Texas Third Court of Appeals Place 4, with Scott King Field and former Perry appointee to Austin's 427th, Melissa Goodwin both filing. There's also a long line of judges looking at Texas Supreme Court Place 3, including four from the appellate courts (Jeff Brown, Jim Moseley, Rebecca Simmons, and Rick Strange) and one district judge (Debra Lehrman from Fort Worth). Yet the most recognizable name may be ex-state rep (and sometime street brawler) Rick Green.

Mike McNamara became the first Republican to file for a Travis County office back on Dec. 21 when he decided to challenge Democratic county judge Sam Biscoe, but he's not alone, as Austin Jaycee's treasurer Erich Landrum wants to be county treasurer. In the justice of the peace races, Glenn Bass went from HD-48 to JP 2: Meanwhile, in the JP 3 race, there's Travis County Republican Liberty Caucus president Michael Barre, and Republican/Democrat/Republican again Madeleine Connor. Finally, proving that you can't keep a good mayoral candidate down, "liberal libertarian" David Buttross is going after Democratic incumbent Sarah Eckhardt in the county commissioner's court.