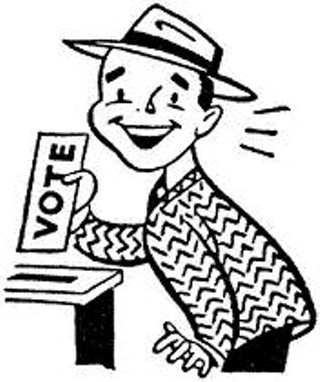 As the old saying goes, if you haven't filed, you're not really a candidate, and so any remaining potential names for the March 2 primaries have until 6pm tonight to prove they weren't just flapping their gums. That's the deadline for inclusion, so look for a quick flurry of filings before close of business.

One anticipated Republican primary has vaporized as Bush-friendly documentarian Glenn Bass announced on his campaign website that he won't be getting into the House District 48 race with sportscaster and GOPAC-TX running buddy Dan Neill. Instead, he's filed for the Justice of the Peace precinct 2 post.

Rumors persist that Amy Clark Meachum may perform a similar jump in the Democratic primaries. Meachum originally announced that she was running for the 353rd District Court, but there are rumors that she will jump in against Judge Jan Patterson in the 201st. Why jump races? Because many Democrats are still furious at Patterson over her letters to Gov. Rick Perry. Here's where it gets confusing: The 353rd became vacant when Judge Scott Ozmun died last year, and Patterson asked Perry that she be appointed to the seat. That would free up her vital 3rd Court of Appeals seat to Perry to fill by nomination, which Democrats were convinced he would give to a GOP nominee, thus re-balancing the power on the bench. Instead, after Sen. Kirk Watson, D-Austin, nixed her appointment, Perry went with former Deputy First Assistant Jeff Rose for the 353rd. Because it's an unexpired term, Rose has to defend it, and Democrat Tim Sulak is challenging him. Now Patterson, who wanted the 353rd by appointment, is now running for the vacant 201st. As for Meachum, don't read too much into it, but there is no mention of which seat she is seeking on her campaign site.

Meanwhile, Burnt Orange Report is reporting that Ted Ankrum might be stepping in at the last minute to replace Jack McDonald as the Democrat to take on Republican U.S. Rep. Mike McCaul in Congressional District 10. 2008 challenger Larry Joe Doherty, who was widely regarded at the time as running a terrible campaign, took a pass, as did his then-primary challenger Dan Grant (with a new baby on the way, he put family first). However, Ankrum is a wild card: He ran against McCaul in 2006 and got annihilated, but that was in part because he ran a $72,000 campaign. If he files, will he be taken any more seriously this time around?

So who has filed for what so far in Travis? (* denotes incumbent)

Justice of the Peace