Earle gets in, Isett out, Miles versus Edwards round three in Houston 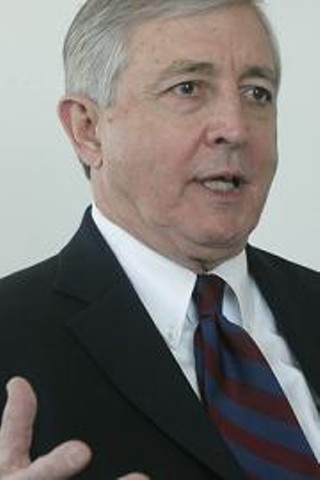 Ronnie Earle: From watchdog to the west end of the Capitol? (Photo by Jana Birchum)

There had been a rumor about a serious Democratic candidate for lieutenant governor – more serious than Marc Katz, that is. Turns out that it's former Travis County District Attorney (and bane of Tom DeLay) Ronnie Earle.

Earle's Friday filing is an interesting development, especially since, even though Earle is portrayed by DeLay loyalists as a Democratic attack dog that perverted his office, he went after lawmakers from both major parties when he oversaw the state's special prosecution unit. However, he may not have a clear run for the nomination: Apart from Katz, former Texas AFL-CIO Executive Vice President and Democratic superdelegate Linda Chavez-Thompson is said to be considering a run.

On the Legislature side of things, the only big Travis County news is that Rep. Mark Strama, D-Austin, submitted his re-election paperwork, leaving fellow Democrat Rep. Eliot Naishtat as the sole remaining member of the delegation to still file.

Outside of the county line, there was a surprising announcement: Former Sunset Commission chair, Rep. Carl Isett, R-Lubbock, has announced that he will not be running again. That's significant because, along with fellow unexpected political retiree Rep. Dan Gattis, R-Georgetown, that's two major vacancies amongst the GOP power structure on the floor next session. Both incumbents would have walked a re-election, and Gattis was the original heir apparent for Sen. Steve Ogden, R-Bryan, until Ogden wrecked that plan by returning to the ballot, leaving Gattis raceless. According to his press release, Isett is standing down to concentrate on his family and his career in the Naval Reserve. Towards the end of the last session, he chatted about the challenge of balancing a military career, complete with overseas deployments, with a legislative career. Still, this triggers a scramble to find not only a Republican successor but a Democratic challenger in a seat that everyone expected to be a lock for the incumbent.

Still, less strange than events in Houston's House District 146: Back in 2006, Democrat Borris Miles defeated incumbent Al Edwards by painting him as a DINO (Democrat in Name Only); Edwards returned the favor in 2008 by taking his old seat back (it helped that Miles had a terrible session). Now with all his legal issues cleared up, Miles' staff told the Associated Press he's back and has filed for round three (no sign of that yet on the Texas Democratic Party candidate list so far).

So who has filed for what so far in Travis? (* denotes incumbent)

Justice of the Peace