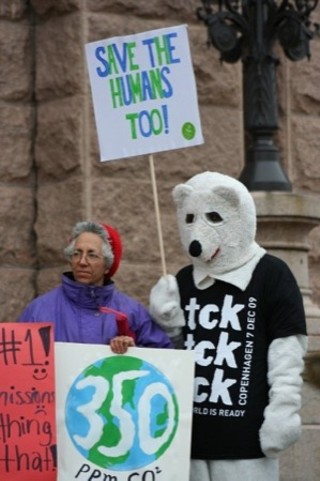 Ralliers gathered at the Capitol Dec. 12 in support of climate action. (Courtesy of Mikanh Gaffney)

In response to COP15, Gov. Rick Perry has aligned himself with Americans for Prosperity, a group that is vociferously opposing U.S. participation in a carbon cap-and-trade agreement at the international climate summit in Copen­hagen – or any U.S. action or spending on global warming. See hotairtour.org.

On the endorsements page at www.rickperry.org, State Director of Americans for Prosperity Peggy Venable states, “Thanks to Gov. Perry's leadership, the Texas economy is the envy of the nation, serving as a beacon of fiscal sanity for the country."

Perry was the only U.S. governor to participate in AFP’s Dec. 9 “Webcast from Copenhagen Climate Conference.” Perry participated in an Austin event – held in a room at the Texas State Capitol – that was part of the AFP Hot Air Tour program, which it says has “exposed the ‘ballooning’ cost of global warming alarmism across the United States.”

On Perry’s current campaign website, the sole posting on the “Environment and Natural Resources” issues page is a Dec. 7 article comparing Perry favorably to California Governor Arnold Schwarzenegger, who in 2006 supported a new law requiring California to reduce its greenhouse gas emissions 25% by 2020. Perry has positioned himself, by contrast, as a climate skeptic who asserts there’s no need for curtailing oil-and-gas-generated emissions. According to FollowTheMoney.org, oil and gas industry contributions to Perry’s campaign chests totaled $1,677,296 in 2006 and $955,886 in 2008.

Note: As a nonprofit nonpartisan organization, AFP is a supporter but not a campaign contributor of Perry's. The Chronicle regrets the error in the original blog post.