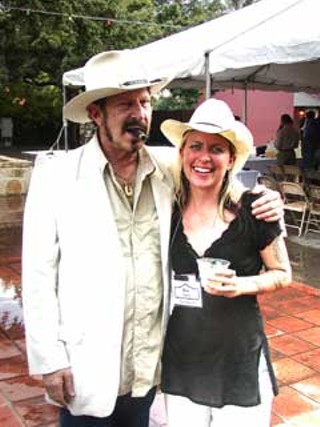 Friedman: Hoping the rank and file Dems see him as the man in the white hat this time (Photo by Kate X Messer)

So why has Democrat Kinky Friedman jumped into the agriculture commissioner's race? An interesting conversation with Kinky's campaign consultant Colin Strother (best known locally as ex-campaign boss for Rep. Dawnna Dukes, D-Austin) fills in a lot of the blanks.

First up, before switching, Kinky met with both remaining major Democratic names in the governor's race – Bill White and Farouk Shami – over the weekend (on a related note, Shami's campaign staff issued a press release at midday saying he'd filed today, then retracted the announcement at 2pm). However, it may have been his conversations with former ag commissioner (and Chronicle regular) Jim Hightower that really swung it for him.

So why ag, and not land commissioner, as had been speculated? Strother said, "As we were sitting down and evaluating where Kinky's goals and interests lie, it seemed like a good fit. He cares very passionately about land conservation and beaches and veterans, but the most important thing (for that race) is that we have a strong Democratic presence on the redistricting commission." That's going to be a pivotal part of the land job for the next legislative cycle and, Strother said, Kinky thought that there were better qualified candidates for that role.

As mentioned earlier, the close personal connections between Shami, Gilbert and Kinky could make life complicated, and Strother confirmed that when he said, "Kinky considers [Farouk] like a brother." Now that both men changed races, he added, "I don't think much changes for Kinky. I think it changes a lot for Gilbert." Clearing the path for a White/Shami fight could also clear some animosity the party rank-and-file felt over his 2006 gubernatorial run. Strother said, "It answers the question of, 'What are Kinky's motivations? If it was all about Kinky, we'd still be in the governor's race, raising as much hell as possible, probably forcing a run-off and forcing a lot of money to be wasted that could be spent against a Republican in November."

So now he has to fight fellow populist-progressive Gilbert head-on. While saying that Kinky isn't prepared to go negative, he pointed to his candidate's fund-raising prowess in his gubernatorial run and his name recognition over the rancher as a big boost to the ticket. He added, "We don't just need everybody in the boat. We need everybody in the boat with an oar, rowing in the same direction."

So why Kinky over incumbent Republican Commissioner Todd Staples? Considering his support for the Trans-Texas Corridor, as well as seemingly standing by as the agriculture industry has collapsed into drought and debt, Strother said, "The difficult question for Todd is, 'Why me?'"