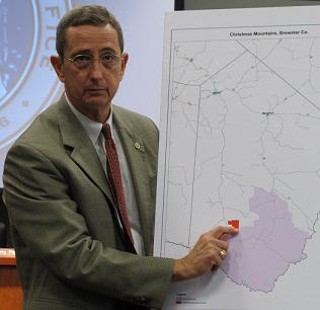 Patterson: Seriously, who could resist that? (Photo by Richard Whittaker)

There are many things that can be said about Land Commissioner Jerry Patterson (and trust us, we've said quite a few of the choicer ones), but political humorist should never be left off the list.

Considering the absence of challengers from any party for his office, the former state senator has put out a plea for a little company in the long, lonely months leading up to the Nov. 2010 elections:

So does he have anyone special in mind to fill that gap in his life? How's about Kinky Friedman, who is broadly expected to drop out of the governor's race and look for another office. Patterson added, coyly, "Kinky, call me. We’ll talk."

How serious is this? Kinky was being talked up as a potential Agriculture Commissioner candidate before Hank Gilbert filed for that, so Land wouldn't be too much of a stretch. Also, the press corps would be rubbing their hands about a potentially tedious non-election turning into a fight between the Kinkster and a man that broke his wrist last year doing a cartwheel into his office.