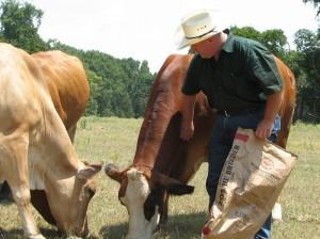 There's a brutal truth about Hank Gilbert's campaign for governor: No-one, not even diehard supporters, thought he could win the race. The push had always been for him to take another shot at Agriculture Commissioner Todd Staples, but now he's doing that, there may be some lingering questions about how he's done it.

It was probably an ominous sign that he held his conference call at 12pm Friday – the exact same time that Houston Mayor Bill White was announcing his switch to the governor's race, thus extinguishing any real remaining hope that Gilbert could his party's nomination. Shifting to ag commiss left his fans breathing a sigh of relief (not least because Staples has been a bump on a log with a shaky grasp on campaign law). However, endorsing political newcomer Farouk Shami over White (in part because Gilbert prefers his views, in part because White told him he was staying in the Senate race) left some Democrats slapping their foreheads.

So, as some have pointedly asked, why is it OK for him to jump from gov to ag, but not White to shift from Senate to gov? The important phrase is "honorable conclusion." That's what White said he was looking for back on Nov. 24 when Ambassador Tom Schieffer dropped out of the race, and it's what he said he's reached now (In fact, we called attention to this careful wording at the time).

Endorsing Shami undoubtedly helps the hair care product tycoon by raising him above Kinky Friedman when it comes to media curiosity about his campaign. But beyond the $10 million of his own money that he says he can bring to the campaign, Shami has an uphill struggle to prove his crediblity and political credentials to primary voters (One joke that's already doing the rounds: "How do you spell Farouk Shami in Spanish? T–o–n–y S–a–n–c–h–e–z").

The real question is going to be about whether Democratic activists and donors will cold-shoulder Gilbert, or whether they'll just get behind the lead challenger to Staples (take into account that, while it's doubtful that his Shami endorsement means much to the rank and file Dems, he is personally popular and well regarded as a pragmatic rural progressive).

So where is Staples in all this? The Republican incumbent has already started Tweeting about Gilbert like it's a general election. Unfortunately, his Twitter account has revealed what may be a thin skin that Dems will leap on.