Gov. Rick Perry's appointees don't always have the best track record, but Texas Youth Commission Independent Ombudsman Catherine Evans may have set a new bar: Forced to resign within two months of her appointment after she was indicted on Monday for smuggling a knife into a TYC facility.

This all began in October when Evans was visiting the Crockett State School in East Texas. According to Special Prosecution Unit Executive Director Gina De Bottis, "She had not been properly searched at the front gate, and when she was walking around the facility, she was approached by another person who asked her if she had been searched." On further investigation, the state claims that they found a Swiss Army-style knife in her bag, plus other items that could have been contraband, like a clear vial of a white powdery substance that tested positive in the field for amphetamines but turned out later to be dish washing detergent.

So what, some may ask? She forgot to take a pocket knife out of her bag, where's the felony? Well, a felony is exactly what it is (possessing a prohibited item in a correctional facility). What makes this all the more embarrassing is that Evans is not only a former judge, a former commissioner of the Texas Juvenile Probation and the Dallas County Juvenile Advisory Board, but she previously served on the TYC Advisory Board (although, frankly, considering the condition of Texas' juvenile justice system, being that historically involved with these agencies might actually disbar, rather than qualify, one for the position).

She now faces Third Degree Felony charges, with a sentence of two to ten years in jail plus a $10,000 fine. However, DeBottis said that, since Evans is not likely to have a criminal record, there is a high probability of parole.

Evans only took over at TYC in October, when she replaced inaugural ombudsman, ex-ACLU of Texas executive director and former Criminal Justice Coalition chair Will Harrell. Well regarded as an intelligent reformer, he was deeply involved in the original 2007 agency reforms and established the well-regarded Youth Ombudsman program. He moved to become TYC's director of special projects earlier this year. It's going to be interesting to see how lawmakers and prison reform advocates will respond both to Evans' failure of judgment and the facility's failed safety procedures.

What may remain even more embarrassing is that, three years after the TYC scandal first broke, and two years after the legislature ripped away the facade of functionality to reveal the abuse that seemed inherent in the system, there has been a worrying lack of prosecutions over that debacle, and those that have progressed have been worryingly slow. 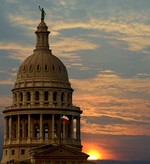