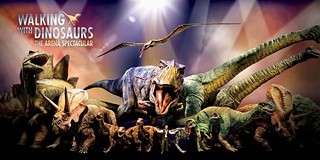 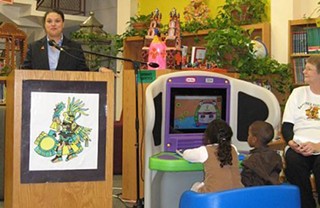 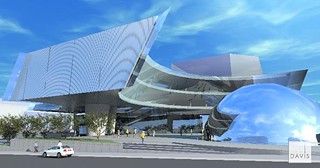 Walking with Dinosaurs: Into the manufacturing future, or to economic extinction?

Recently Austin ISD has been highlighting the trouble with getting kids ready for the high tech future, and the three truths about science education. One, equations are dull. Two, space is awesome. Three, dinosaurs rock.

The continuing push for a downtown planetarium (and the absence thereof from the Austin skyline) shows that there is still a long way to go on the astronomy front. As for dinosaurs, there should be a daily queue outside of the Texas Memorial Museum and its impressive fossil collection. The only problem with fossils is that it's impossible to see them without wishing so hard that they could be in motion. Just a shame that humanity is about 65 million years too late for that.

The BBC's ground-breaking CGI-enhanced TV series Walking with Dinosaurs came closest to a scientifically accurate depiction of the age of the terrible lizards, and the elaborate animatronics of live show Walking with Dinosaurs: The Arena Experience are the next step to having real dinosaurs sniffing around the house. Closing out its run at the Cedar Park Center tonight, it's the next best thing imaginable to a Cretaceous vacation.

But how can a touring production based around hydraulics and latex be anything other than a grand-scale puppet show? By being a super-grand-scale puppet show. From the first appearance of the Jurassic predator Liliensternus through to the awe-inspiring three-way fight between Torosaurus, Ankylosaurus and Allosaurus, the show balances both educational value and the astonishing experience of being twenty foot from a free-roaming and anatomically accurate dinosaur.

This isn't the first big-scale dinosaur puppet show to come through town. Back in 2005, the Hudson Vagabond Puppet Theater brought its charming, Sesame Street-style version of evolution, the Mammoth Follies to the Paramount. Both shows share a common structure: A human narrator, interacting with extinct species and explaining evolution. Walking With Dinosaurs is much more of the "nature, red in tooth and claw" school, but is also a technical extravaganza. The smaller critters are elaborate suits, the larger self-powered behemoths. What it achieves is really a double-whammy for science education for kids. First, it makes paleontology exciting and, second, it makes engineering exciting. What research created, mechanics made solid.

So how does this tie in to Austin ISD? Because new Superintendent Meria Carstarphen spent much of the last week explaining the value of technology in the classroom as part of preparing kids for the future. Last Monday she showed off the new innovation stations, then on Friday she test drove one of the 50 new Young Explorer learning centers donated to the district by IBM. They may well make teachers' jobs easier. (As Education Austin president Louis Malfaro noted, "The research is that there's very little correlation between kids' achievement in schools and dumping a lot of money onto computers.") But like the dinosaurs on display in Cedar Park, if they provide a trigger for getting kids interested in science, that's a big plus.

The worrying question is, once they leave school, will there be an engineering sector for them to work in? There was great celebration this week, courtesy of the Texas Workforce Commission, that the state added some jobs last month. However, the bulk of these were in education and health, plus a slab in the financial services sector. Construction, transportation, utilities and manufacturing jobs are still flatlining or falling.

It may take some bold decisions and integrated thinking to reverse that trend. For example, why is Austin still selling its recyclables, not just at a loss, but at all? The city has issued another request for proposal for its long-delayed materials recovery facility, and is still debating whether to have a simple MRF or to establish an entire science and technology park. At this rate, it's hard to see when either will happen. It's a situation that everyone agrees needs to be fixed, but no one is asking how we got here, shipping away valuable raw materials that could be fed straight into a localized, clean and well-regulated manufacturing sector. Oh, yeah, because there isn't one.

How to get one? That doesn't seem to be part of the debate. Instead, too many parties are satisfied with being reactive, rather than proactive, in developing the tech and engineering sectors. Talking to Greater Austin Chamber of Commerce education vice-president Drew Scheberle this week, he warned that neither AISD nor the state university systems are turning out the level or training of employees that business needs, and that businesses aren't in a position to train them once they get out into the job market. Worrying, considering that the artisan system and the innovative phase of the industrial revolution were built on the apprentice system. Similarly, Malfaro said, "What we have to do is work out how to get kids into the jobs that exist here and will exist here around technology." It may seem that the real urgency may be in making sure that there are some jobs.

Maybe it's not the kids that need inspiring by shows like Walking with Dinosaurs: It may well be the adults.