Shapleigh Not Running in 2010 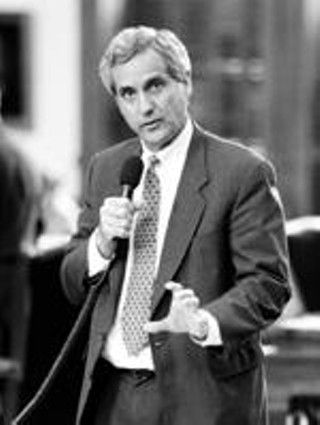 Shapleigh: No state Senate run in 2010

Call him the Lion of the Texas Senate. For liberals in this state, there's rarely been a better and more pugnacious champion than Sen. Eliot Shapleigh, D-El Paso: So his announcement today that he will not run for his seat again in 2010 will be a blow to many progressives.

This surprised everyone (even his staff only found out this morning after he sat down to inform them of his decision).

In our family, public service is the highest calling. While other public service may lie ahead, I will not run for the Texas Senate in 2010. During each day of the last decade, we have endeavored to do our very best for the people of our great community and state. In public life, especially in Texas during this decade, doing what’s right, not what’s expedient is what matters. I am grateful to the people who elected me for the opportunity to serve.

Start reading between the lines on that "while other public service may lie ahead" comment.

So who is stepping up to the plate to replace him? Brandi Grissom of the Texas Tribune is reporting that El Paso Democratic Reps Joe Pickett and Norma Chavez, as well as El Paso County Attorney Jose Rodriguez, are all considering a run for the soon-to-be-vacant seat.