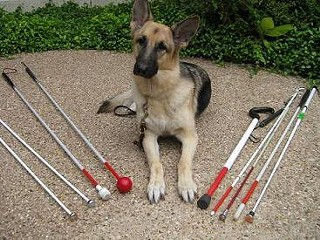 As the home to the Texas School for the Blind and Visually Impaired, Austin should already appreciate the independence that the classic white cane gives to people living with vision loss. Tuesday will see the nation's biggest celebration of that independence.

Oct. 13 sees the ninth annual White Cane Day celebration take to the streets, with an anticipated 300 white cane users marching to City Hall Plaza. There Mayor Lee Leffingwell will read a proclamation reminding other Austinites of the value of the visually impaired to the community. That will be followed by a day of celebration over at Republic Square Park.

Quick reminder: Qualified applicants can register with the National Federation for the Blind for a free cane.

On Tuesday, Oct. 13, Austin will host the ninth annual White Cane Day celebration to recognize the contributions of Austin’s blind citizens and promote the public’s awareness of the independence of pedestrians traveling with a white cane or dog guide.

An estimated 300 blind Central Texans of all ages will march along Congress Avenue from the State Capitol to Austin City Hall where they will receive a White Cane Day Proclamation from Mayor Lee Leffingwell. The proclamation ceremony will begin at 10 a.m. on the City Hall Plaza, 301 W. Second St. Parking is available in the City Hall garage off Lavaca Street.

Following the proclamation ceremony the march will proceed to Austin’s Republic Square Park, at Guadalupe and Fourth streets, for a day of celebration including a barbecue, live music, face painting, a rock wall, games and a moon walk for children.

Austin’s White Cane Day is regarded as the largest celebration in the nation. This day is known locally as an “Independence Day” for the estimated 25,000 individuals living in Travis and Williamson counties who are blind or have significant vision impairment. Each year’s event grows larger with participation by new sponsors and non-profit organizations of blind citizens.

“Austin is proud to host the largest national White Cane Day celebration recognizing the independence of blind citizens,” said Dolores Gonzalez, the City's American's with Disabilities Act Coordinator. “Many City departments, including the ADA Office, Austin/Travis County Health and Human Services, Channel 6, Parks and Recreation and Right of Way Management, play an important role in contributing to the overwhelming success of this great annual event.”

In 1964, President Lyndon B. Johnson first observed White Cane Safety Day with a proclamation declaring the day as a safety reminder to promote courtesy and special consideration to the blind on this nation’s streets and roadways. Since this first observance, White Cane Day has taken on greater meaning as a time to celebrate the independence of the blind and their right to participate fully in society.

All 50 states now have their own White Cane law, which not only addresses pedestrian safety for the blind, but more importantly, also guarantees civil rights protections. The Texas White Cane law also ensures the rights of individuals traveling with a dog guide to have equal access to all public places. Before the passage of our nation’s White Cane laws, blind persons traveling with a dog guide were routinely refused service in restaurants or excluded from public transportation. Others were excluded from employment or equal access to housing based solely on their status of blindness.

Much has changed in the years since the first White Cane Day, but there are still public misconceptions about blindness and the abilities of blind people. This year’s White Cane Day theme embodies the goals and spirit of this annual event with the slogan “The only disability is a bad attitude.”

For more information and details on this year’s celebration, please visit www.whitecaneday.org.