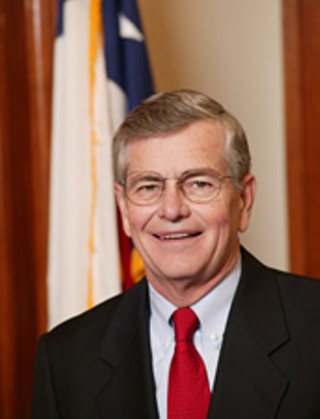 Craddick: How can we miss you if you won't go away?

Rep. Tom Craddick, R-Midland, is no longer speaker, but that doesn't mean that the slate is clean. Texans for Public Justice have filed a complaint with the Texas Ethics Commission accusing the Texas Jobs & Opportunity Build A Secure Future PAC of illegally funneling campaign funds for him.

It all goes back to 2008, when Texas J.O.B.S. (apparently, there's no F'ing "Future" in this acronym) handed out $150,000 to Reps. Kevin Bailey, D-Houston, Kino Flores, D-Palmview, and Aaron Pena, D-Edinburg. All three were known as loyal Craddick Ds (and Flores now has plenty of his own legal and financial headaches). At the time, campaign staff for Rep. Dawnna Dukes, D-Austin, went to great lengths to explain they had not accepted a similar check. Texans for Public Justice Director Craig McDonald explained, "This was no secret: Everyone knew that this money came from Craddick."

So what's the big deal? Isn't this the big bipartisan state where it's perfectly fine for a GOPer to dump cash into Dem elections with no hope of any kind of quid pro quo?

Well, unless the money is given to the PAC to skate around campaign finance law. TPJ alleges, and the Feb. 4 2008 campaign finance reports show, that the only money Texas J.O.B.S. had was that $250,000 check from ol' smilin' Tom. TPJ also contends that the then-speaker's daughter Christi Craddick sent instructions on how to disperse the money. That, TPJ alleges, makes Texas J.O.B.S. an illegal conduit for an effectively anonymous campaign contribution from Craddick. McDonald said, "He resurrected this PAC. What makes it clear is that they didn't have a red cent before that check."

TPJ first complained about this in 2008, when the group complained to Travis County District Attorney Ronnie Earle that the cash violated the Speaker Statute, which bars using campaign funds to run for House Speaker (see the original complaint here).

That original complaint got mired in the mud when an unusual coalition of conservatives groups and the ACLU tried to get the speaker statute declared unconstitutional. While the statute was ultimately upheld in part, the Craddick complaint faltered. Earle handed the case over to Travis County Attorney David Escamila, who ultimately determined that it wasn't a violation of the Speaker Statute because what's left of the statute is so weak that it's tough to violate. So why bring this back now, especially when it means going after the PAC rather than Craddick directly? McDonald's answer was pretty simple: "We think someone should be held accountable."

Will these long-rolling complaints finally ring the death knell for Craddick's political influence? McDonald said, "I don't think we'll have him around for too much longer."

Austin, TX: Texans for Public Justice filed a formal complaint with the Texas Ethics Commission today alleging that the Texas Jobs & Opportunity Build A Secure Future PAC (Jobs PAC) served as an illegal conduit in 2008 for a total of $150,000 in contributions from then-Speaker Tom Craddick to three Democratic House candidates.

Jobs PAC reported that it received $250,000 from Tom Craddick’s campaign committee on January 10, 2008. According to news reports, around that time Craddick campaign employee Christi Craddick also provided Texas Jobs with written instructions to distribute the funds to Democratic Reps. Kevin Bailey, Dawnna Dukes, Kino Flores and Aaron Pena. All four incumbents previously supported Republican Speaker Craddick and faced challengers in the 2008 Democratic primary. According to its own reports, Jobs PAC wrote three checks of $50,000 apiece to the campaigns of Reps. Bailey, Flores and Pena on January 11, 2008. By its own accounting, at the time Texas Jobs wrote these checks its sole source of funding was the $250,000 that it received the day before from the Craddick campaign. Rep. Dukes, the fourth lawmaker, told the Austin American-Statesman that she rejected an offer to receive $50,000 from Texas Jobs because her opponent already was making her Craddick ties a campaign issue.

“Tom Craddick wanted to move tens of thousands of dollars to his favorite Democrats without letting voters know,” said Texans for Public Justice Director Craig McDonald. “Hiding the true source of campaign funds is illegal. Craddick could have contributed the money directly and openly. Instead, he used Texas Jobs to launder his money and keep Texans in dark.”

Texas campaign laws prohibit individuals or political committees from secretly acting as conduits for other donors (Texas Election Code Chapter 253.001). Anyone playing such an intermediary role must disclose it so the ultimate recipient can report the true source of campaign contributions. In this case, Jobs PAC was obligated to inform Reps. Bailey, Flores and Pena that the Craddick campaign was the source of their $50,000 checks, a fact that the recipients then were obligated to report in campaign disclosures. The Craddick campaign used Texas Jobs to try to keep its large campaign contributions anonymous. Yet such anonymous political contributions are expressly prohibited by Texas law.