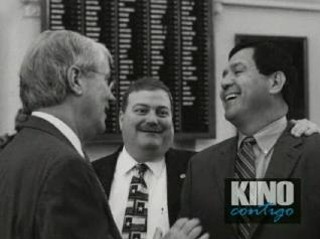 Two months after he was indicted in Travis County for campaign finance violations, Rep. Ismael "Kino" Flores, D-Mission, has announced that he will not run for re-election in 2010. (UPDATE: Within two hours, a new name has joined the race to replace him.)

Not that there will be too many Democrats crying in their beer over this retirement from the Lege. As part of the Democrats for Reform, Flores was one of the cardinal Craddick Ds, and a target of the Too Close to Craddick PAC in 2008.

So who are the contenders looking to fill his seat? Sandra Rodriguez challenged Flores in 2008, but fell short on primary day. She already held her campaign kickoff last week, but just after Flores' announcement, the Rio Grande Guardian reported that attorney (and son of Flores' predecessor, Sergio Muñoz, Sr.) Sergio Muñoz, Jr. wants to continue the family tradition by representing Hidalgo County in the House. Both come from families with local political clout (Rodriguez' father sat on the Mission city council), so it could be interesting times in the Valley.