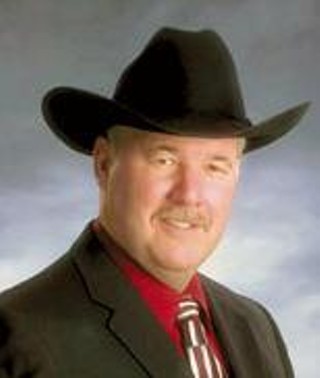 Gilbert: Well, as a rancher, he'll know how to deal with bu ... oh, you know the rest

There's another name in the race for the Democratic gubernatorial nomination, with the surprise announcement that Smith County cattle rancher Hank Gilbert is throwing his hat in the ring.

Those with a long memory may recall that Gilbert ran for agriculture commissioner in 2006. The smart money for a while had been on a rematch with Agriculture Commissioner Todd Staples, who beat him 55%-42% in 2006 (Libertarian Clay Woolam took the remaining 3%).

The post has sort of become a Republican sinecure and a stepping stone to higher office, since the last two incumbents have been Gov. Rick Perry and Comptroller Susan Combs. Combs was unpopular with cattle farmers for failing to create any coherent strategy on dealing with the drought. Back in 2006, Gilbert suggested shipping good bloodlines out of state, rather than sending them to be slaughtered for ground round at pennies on the dollar. He also campaigned against the expanded National Animal Identification System, and warned about inaccurate gas pumps and scales.