(Re)Birth of a Meme 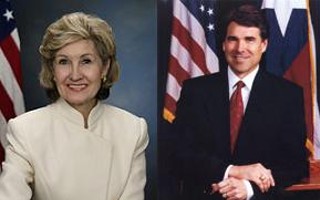 Hutchison and Perry: Anyone else laying odds the ugliness has only just begun?

Sen. Kay Bailey Hutchison did not say that Gov. Rick Perry is gay.

By now the story that the guv's big primary challenger has been hiding secret messages on her campaign website has been burning up teh interwebs. In fact, it's kinda hooey, and shows that a lot of reporters don't seem to understand how a website works.

Yesterday, the Statesman reported that "Perry gay" was one of a series of search terms hidden in the html for one of her campaign sites. It was not, as some sources have misreported, fnord on the home page: It was in the page source. It's an old, nay primitive, but proven way to generate traffic to a site: Load the code with a mess of non sequitur keywords to get more search engine hits. The only way it would come up would be a) you happen to be looking through the page source or b) if you ran a search for "Perry gay." So the majority of people who would find this are bored code monkeys and Log Cabin Republicans.

Yet 24 hours later, the old rumor has been picked up by a bunch of national outlets, including Talking Points Memo, Politico, and Huffington Post (who also link to Chronicle news editor Michael King's 2004 editorial debunking it as unproven).

Who does this damage? Initially, Hutchison took a lot of of flack over this, but with the amount of updates and corrections going on as reporters get issued a copy of HTML for Dummies, that's abating. However, the Perry campaign is going to have to step cautiously when debunking this. Think of it as the conservative primary version of "When did you stop beating your wife?"

There's a further interesting twist here: This wasn't on the main campaign website, TexansForKay.com, but the secondary site, StandByKay.com, so even if it gets into trouble for violating search engine terms and conditions, it's no real campaigning biggy.

So yesterday it looked like the Hutchison campaign would be asking for their money back from their web designers. If the old story about Perry being gay gains some traction among primary voters, they may owe them a bonus.